Home Sports Women send seniors out with a win
Sports

The women of Northwestern’s soccer squad finished off a rough year with a win on Saturday night against Concordia 2-1. The Raiders did not qualify for the postseason and finished with a record of 4-11-3, and 2-8 in the GPAC.
“Our record didn’t show how good this team was,” said sophomore Alli Dunkelberger. “We kept working hard throughout all the games.”
The Raiders did not pay any regard to their record on senior night, and came out inspired in the season finale.
The score at halftime was knotted at 0-0, but NW scored in the 50th minute when freshman Tyler Farr was assisted by sophomore Alli Dunkelberger.
It was Farr’s fifth goal of the year, which was good enough for second on the team to Dunkelberger’s eight.
Sophomore Alyssa Duren kept the pressure on Concordia by scoring a goal of her own in the 54th minute. She finished the year with four goals and an assist. Concordia’s only goal came off a penalty kick in the 72nd minute.
Senior Wendy Hofmeyer played the whole game in goal, collecting 14 saves. Splitting time with sophomore Ariel Watts, Hofmeyer saved 80 percent of shots taken on her and had a GAA of 1.81.
This was the final game for Hofmeyer and her fellow senior on the back line, Ashley Trail.
“They both had really good leadership and were always so encouraging,” Dunkelberger said. “[Hofmeyer] was always making sure we were excited for games and practices. [Trail] was definitely a role model for hard work, and she gave 100 percent.”
The Raiders will return nine of their eleven starters for next season. 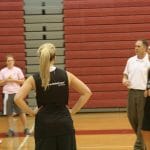