Under the direction of first year coach Scott Bahrke, the Northwestern cross country team has a new face at the helm of a talented group of runners.

Starting off on the women’s side, the team will not rely on one runner to place high in meets, but rather on six of last year’s top eight returners to pack well. Not only focused on finishes, the squad also hopes to positively impact one another.

“We are striving to run with a purpose for our teammates and God,” said senior captain Leslie Stover.

On the course, 2011’s success is a good indicator of what is to come.

Stover and fellow senior Amy Van Skike both had multiple top-25 finishes last season, including Van Skike taking 21st at the GPAC Championship. Another team captain is junior Dawn Gildersleeve, who placed in the top-25 at every meet last season.

Junior Lauren Aycock is also expected to be in the top seven. Since no one runner will stand out above the other, Stover expects there to be shifting on the leaderboard.

“We will all need to work together,” Stover said. “The order of finishes will change every race.”

Sophomores Sara Edwardson, Amber Sandbulte and Sarah Wittenberg plan on building off their freshman year success. Edwardson had a top-10 finish and was consistently a top five competitor for the Raiders.

On the men’s side, a young team is hoping to shake up the rest of the conference.

“We want to make a statement to the rest of the GPAC,” sophomore Logan Hovland said. “I think we’re under-ranked and I think we’ll surprise people.”

Seniors Jesse Baldwin and Andrew Lichter return for their final year on the course. Junior Zach Wittenberg will also look to set the pace for the Raiders after being sidelined by injury last fall. As a freshman in 2010, he was the lead NW runner, an accolade that helped him garner a captain spot this year.

One of the more exciting parts of the program is the depth in the sophomore class. Four varsity runners from 2011 look to avoid the sophomore slump: Hovland, Skyler Giddings, Anthony Epp and Jose Martinez. Hovland was the top NW runner at the end of last season, finishing a team best 29th at the GPAC meet.

Freshmen Elliot Stoltz and Caleb VanderBaan showed promise at the first preseason meet last weekend, and hope to build on that success to supply depth.

“This year’s class is even better than last year,” Hovland said.

The first full length meet of the year is Saturday morning at the NXN Heartland Preview in Sioux Falls, S.D.

Football squad sets sights on one week at a time 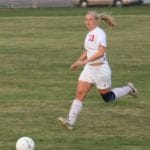