The Red Raider women’s soccer team looks to better a 4-11-3 record this season as they return seven starters from last year. This young group has high hopes for the 2012 season.

“We are putting the past behind us and focusing on the future,” said junior goalkeeper Ariel Watts.

Out front for Northwestern is all-conference honorable-mention sophomore Tyler Farr who led the team in goals with five , and junior Ann Calsbeek who started frequently for the team last year.

Junior captain Jessie VanderBaan, junior Jenny Niemeyer, junior Alyssa Duren, junior Jo Jensen, and freshman Mattie Ostrowski look to be the base of this year’s team. They all will see time at the midfielder position.

The defensive section of the team is led by senior captain Linden Figgie, as well as junior Gretchen Sutherland, sophomore Kari Hilbrands and sophomore Kati Hill.

Also on defense, protecting the goal, will be Watts and junior Caiti Shaw and will be fighting for a spot defending the net during the season.

Watts was key to point out the different responsibilities each member of the team has.

“Everyone plays their own role on the field” Watts said.

The Raiders made a formation switch coming into the season from a 4-5-1 formation to a 4-4-2, but they still plan on running the old formation depending on the opponent.

The current record of the Raiders is 1-2-1 after losing two on the road in to NCAA teams in Colorado. 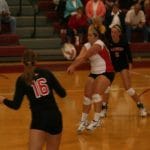