The lights dim. A spotlight shines down on two competitors going head-to-head, each clutching an Xbox controller in their hands. An enormous screen hangs above a sold-out crowd, eagerly cheering on their champion. A booming announcer’s voice rings across the arena, signaling the beginning of the match. What’s on the line? Glory.

This is not exactly what the Hospers Video Game tournament might look like, but it certainly feels that way when you hear Hospers native Lucas Heiberger talk about it. As the RA of Hospers Hall’s second floor, Heiberger takes his responsibilities very seriously and one of those is the mediator and commentator of the Annual Hospers Video Game Tournament (HVGT).

This impressive display of electronic sports skill takes place in the Hospers lobby over the course of second semester and is all played on Heiberger’s own Xbox. The game chosen? A hidden gem called Sega Soccer Slam.

“The main point of the HVGT is to pick a game that no one is skilled at,” Heiberger said. “A game that very few have ever played but has significant depth and enjoyment for a wide variety of players.”

Heiberger’s goal for the tournament is a competition of adaptation and quick learning, not one of practiced skill.

Heiberger, when asked to describe the game, rattled off a ridiculous combination of high adrenaline staples:

“It’s kind of a mix between WWE, soccer, stereotypes and superheroes. It’s loosely based around a sport, but it’s such a unique arcade-y feel that anyone can pick it up and be decent at it.”

The game itself is old-school, high-octane sports action with strong team elements mixed in.

So far, 48 Hospers men and alumni have joined the tournament and over 68 of the round robin preliminaries have been played already. There are many with a perfect record including third floor resident Joshua Fischer, who currently has his sights set on the first seed spot in the bracket.

When asked for tips from his gameplay, Fischer said, “It’s all about passing. Whoever can get the most passes will win the game for sure.”

The top spot is not secure, however, as many other players have managed to attain perfect records in the preliminaries as well, keeping competitors like Fischer on their toes.

When asked where the idea for the HVGT came from, Heiberger had a short story to tell.

“I guess it started the Christmas break of 2014,” Heiberger said. “I had a group of friends over, and we threw in the old Sega Soccer Slam on the Xbox around 2 a.m. and then played a tournament together. Six of us across the rest of the night. We had a blast, and I realized how much fun it could be to have guys play the game as a tournament game.”

So, upon his return to campus, Heiberger began the first of the tournaments with one every year since.

Competitors and Hospers residents alike are anxious about who might play next and who might make it all the way to the top of the Sega Soccer Slam standings. The tournament is not played for money nor for pride, but for glory and fun. 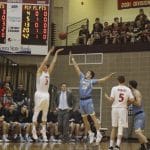 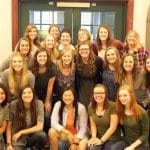