The Northwestern men’s basketball team had its five-game winning streak snapped at the hands of the Dakota Wesleyan University Tigers this past Wednesday, Feb. 14, with an 85-69 loss on the road in Mitchell.

The loss makes NW’s record 12-5 in GPAC play and 22-5 overall. With one game remaining before the GPAC tournament, NW has locked up the 3-seed for the tournament and will host at least one home GPAC game.

DWU came out firing in the first half and never looked back as they led for all 40 minutes of the contest. DWU built up a 14-point lead in the first half (29-15) and ended up going into the locker room holding a 42-32 advantage. NW’s biggest run of the half came by outscoring the Tigers 15-6 with seniors Colton Kooima and Nathan Wedel combining for 13 points during that stretch.

The second half started with a lot of back-and-forth buckets by each team. NW got the game to a four-point margin (64-60), but DWU scored the next four points and did not stop as they eventually went on a 15-4 run during the final five minutes to secure the win.

The Raiders shot 43% for the game, 25% (5/20) from three-point land. Wedel and Kooima led NW with 18 points each, and senior Derek Buysse scored 11. For the first time in seven games and only the sixth time this season, NW was outrebounded. DWU had the advantage in that area, 34-32. Senior Riley Francis led NW with eight rebounds, and senior Parker Mulder hauled in seven of his own. DWU shot 47% for the game and 30% (8/27) from three.

The Raiders take on the Doane Tigers at 4 p.m. this Saturday in Crete, Nebraska. This is the last regular season game for NW as they look to end the season on a high note. Next Wednesday, Feb. 21 will be the first GPAC tournament game and will take place in the Bultman Center. 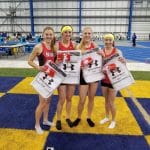 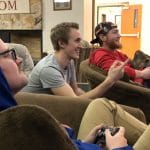