Fathers and cops learn to love in ‘Courageous’

Unlike a typical Hollywood film, “Courageous” isn’t afraid to delve into the sticky issue of divorce and its effect on homes and isn’t scared to do so with an unapologetically Christian approach.

While this movie is about family life in general, the clear emphasis is on the role of the father in the home and the effect of his presence, or his absence, in the life of his children.

The film follows Adam Mitchell (Alex Kendrick) through his life as a cop and a father. As a cop, Adam tries his best but is clearly aging and is no longer able to keep up with the crooks.

As a father, Mitchell ignores his son, but lavishes love on his daughter—a daughter who is taken from him by a drunk driver. After the loss, Adam solemnly resolves to live a life that will impact his remaining family for God’s purpose.

The rest of the story focuses on the challenges and triumphs of this commitment, culminating in a rather stirring call for men to take responsibility for the state of their families. Following him in this commitment are fellow cops Nathan Hayes (Ken Bevel), David Thomson (Ben Davies) and Shane Fuller (Kevin Downes).

With problems that range from a dating daughter to illegitimate children, all of these cops have familial and personal issues to work through.

Although predictable, the plot is deeply emotional in a way that makes the movie feel almost tangible.

“Courageous” is an odd conglomeration of action, emotion, and humor with an extra-large dose of spirituality thrown in for good measure. The movie’s clear attempt to speak to male audiences is rather out of place, as men are likely to prefer to see fireballs rather than tears in the theater.

In spite of this, or perhaps because of it, this movie is refreshing and highly entertaining. 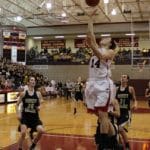