Editors Note: This is Part 1 of a 2 part series on campus safety.

One afternoon in August, Kelsey Lang was walking from the Bolks Apartments to her car, parked in the lot students like to call Hell (Lot L).  Before getting there, a middle-aged man approached her from behind.  She tightened her grip on her laptop and began thinking of self-defense.

“If he tries to grab me or touch me, how am I going to react? Where should I hit him?” she thought.  But he did not plan on taking her laptop.

“The first thing he asked me was if he could come home with me,” Lang said.  She said “no” as she continued to hurry to her car.  But he kept walking near her, laughing at her attempt to get him to leave.  He told her she was beautiful.  He told her to never change.  And when she finally reached her car, he asked her to please not call the cops.

Lang made it to her car safely, but she was bothered by the situation.

“Afterward, I felt upset,” she said, “at how easily this man’s actions affected me, at how unsafe I felt, at how my first thoughts were how to defend myself.”

Lang’s story is appalling, but what is even worse is how normal the situation is.  She is one of many girls at Northwestern who has been followed or catcalled on campus.

Orange City is continuously rated at the top of the lists of safest cities in Iowa.  Yet in this perfectly lovely town, women are walking around in fear of being targeted by men.

“Carry pepper spray,” “take self-defense courses,” “never walk alone after dark.”  We’ve all heard this advice over and over.  And those precautions are important for women to take.  But if we end the conversation there, we are saying that responsibility for this harassment falls in women’s laps.

Men can walk across campus at night without glancing over their shoulder at every turn.  They do not have to carry a weapon with them to go to their car.  For women, these are realities that are faced every day, even in Orange City’s safe little bubble.

Women take on this burden constantly.  But this is not their problem.  Being harassed is not the fault of women because of their strength, their body types or their clothing suggestions.  Harassment is an issue because we live in a society that says women are sexual objects and are to be dominated by the opposite gender.

Men, there is more you can do to help your female friends than just walk them home or to their cars.  You can call other men out when you hear things that are demeaning or degrading to women.  You can shut down conversations that are objectifying.

When a story is told about a women being followed, kidnapped or assaulted, do not first ask if the woman was carrying pepper spray or had gone outside alone.

Women should be able to walk to their cars just like men.  Focus on breaking down the norms that allow men to sexualize women on the street and get away with making women feel uncomfortable and unsafe in their own neighborhoods. 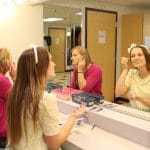