If you pay attention to ads or commercials, then you have likely heard about “Happy Death Day” already. The movie seemed to have a high budget toward attracting an audience, as it felt like advertisements were extra present across social media, streaming services and television commercials in the weeks anticipating the film’s release. While it often happens that movies that are overly publicized end up being an over-rated let down, “Happy Death Day” actually met the mark.

The film begins with protagonist Tree (Jessica Rothe), a self-centered and rude college student who finds herself reliving her own murder at the hands of a killer in a disturbing baby face mask. Every day, she wakes up on her birthday only to be killed later that night and then to wake up once again on her birthday. The cycle continues repeatedly, with only her being aware of what’s happening, which makes for some comedic moments as well.

She finds comfort in a “not-as-cool” boy who is willing to listen to her situation without calling her crazy and helps her decide what she should do. The movie continues with Tree looking for her murderer, as the only way she won’t repeat the day again is to first kill the one who is killing her.

While at first Tree is egotistical and downright cruel, she begins to change as she starts every day over. She beings to realize what type of person she is and was, and eventually uses her unlimited chances at life to treat people better. The depth found in the transformation of the main character is satisfying, as any viewer can see her circumstances as an opportunity to become better than the horrid character she begins as. With a convincing performance, Tree effectively carries the bulk of the plot.

The movie is more plot-focused than your typical scary movie. Because there is a story to tell, it is not directly fixated on fright. If you’re looking to watch a movie only for a scare, “Happy Death Day” isn’t the one to see. However, there are definitely suspenseful moments that will leave many viewers unnerved and on the edge of their seat, though they are complementary to the plot and not the focus.

If you enjoy going to movies to watch the nearly-perfect good looks of movie stars as they escape the clutches of evil killers, then “Happy Death Day” is the movie for you, as Jessica Rothe looks nearly flawless throughout the entire film, even after every murder.

Overall, “Happy Death Day” was good, and perhaps “good” is the most average, yet best, way to describe it. It is not a film you will look forward to watching over and over, but it holds your attention all the way through.

Your Silence Is A Luxury 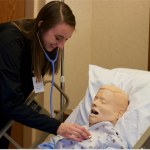