Led by a dominate run game and fierce pass rush, the Raiders sliced and diced the Dakota State Trojans with a score of 47-12 on Saturday in Orange City.

After forcing Dakota State to a quick three and out to start the contest, the Raiders marched methodically down the field, capped off by a four-yard strike from junior quarterback Davis Bloemendaal to junior receiver Brice Byker.

“I was actually jogging to where Jacey Hoegh was because I thought he was going to receive the pass,” Byker said, “but then I realized that I was also open and could catch it, so I dove.”

Shutting down the Trojan offense, the Raiders forced two more three and outs during the first quarter and the Raiders extended their lead to 13-0 courtesy of a 12-yard touchdown by junior Theo Bartman.

On the ensuing Raider possession, Bartman capped off an 11-play, 99-yard drive with a 23-yard scamper to paydirt. Senior kicker Mike O’Brien booted a 26-yard field goal on the next drive, putting the Raiders up 23-0.

To finish out the half, Dakota State mustered some offense, connecting on field goals from 20 and 35 yards on back to back Trojan possessions. The Raiders led 26-6 at half.

The Trojans entered the 3rd quarter on a mission, completing a 74-yard pass for a touchdown to bring the score to 26-12.

The Raiders responded later in the quarter with senior Brandon Smith’s one-yard touchdown surge and again on the next drive with a two-yard Smith touchdown. The Raiders led 37-12 at the end of the third quarter.

Bloemendaal hit sophomore receiver Ben Green for a 41-yard strike on the first Raider offensive play of the fourth quarter for a touchdown. O’Brien capped off the day with a booming 46-yard field goal to bring the final score to 47-12.

Running back tandem Smith and Bartman ran for a combined 312 yards on the ground with Smith rushing for 144 and Bartman 168, each scoring two touchdowns apiece.

“We really solidified our ground attack by rushing for 343 yards,” said senior offensive guard Wil Van’t Hof, “so that was nice to see moving forward.”

GPAC defensive player of the week senior defensive tackle Jordan Carlson, was a force all day as he led the Raiders with 8.5 tackles, as well as notching three sacks and four quarterback hurries.

The Raiders return to action at 1:00 p.m. this Saturday traveling to Lincoln, Neb. to face Nebraska Wesleyan. 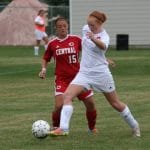 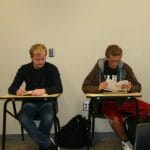