On Saturday, the Northwestern football team battled for a 24-17 victory on the road against Briar Cliff. This win brings the Raiders’ season record to 3-2 and their GPAC record to 2-2.

The game was played at the Dakota Dome in Vermillion, S.D. It was technically a home game for Briar Cliff.

Halfway through the first quarter, senior quarterback Davis Bloemendaal threw a 15-yard touchdown pass to senior running back Theo Bartman. Briar Cliff quickly responded on the next possession with a touchdown to tie the game.

The second quarter ended with neither team making any headway on the scoreboard.

Sophomore running back Jessie Riley scored a touchdown on a two-yard run early in the fourth quarter to finish off a 14 play, 80-yard drive.

The Chargers gave themselves a bit of hope when they scored a touchdown with just over two minutes left in the contest. The Raider offense couldn’t run out the clock, but the defense held firm and ended the game with a sack.

The visiting squad totaled 24 first downs and 369 yards on offense. Bloemendaal completed 10 of 23 passes for 111 yards and two touchdowns. Green and senior Brice Byker were top targets for Bloemandaal with four receptions. Bartman had two catches for 15 yards and a touchdown.

The Raiders had 258 rushing yards. Bartman led the Raiders with 22 carries for 130 yards. This game marked the 12th 100 yard game of Bartman’s career and his second of the season.

Freshman running back Paul Hutson was also an important contributor to the game with 18 carries for a career-high 116 yards.

Northwestern will host No. 14 Concordia at 1 p.m. on Saturday. 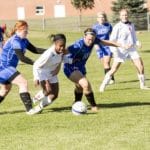