Rahn Franklin says he didn’t know the difference between corn, wheat and beans before coming to Iowa.

He’s now been in Iowa for seven years, and it’s safe to say he knows the difference between the three. Even so, differences aren’t usually something Franklin spends time focusing on. That’s because he’s not here to serve “one color or one group.”

“There’s one race—the human race,” said Franklin, the new Multi-Ethnic Student Counselor, which is itself a new position on campus. “The idea of Christ in that fits so beautifully. There’s a verse in Ephesians that talks about how people come from all different creeds and unite in one church.”

The idea of uniting in one church, in accordance with these principles from Ephesians, has been a driving consideration for Franklin as he has started his new position.

“My emphasis [is on] social justice, if you can call it that,” Franklin said. “It’s about making sure people are treated right for the simple fact that they’re human beings.”

Franklin is striving to motivate people and empower them to accomplish goals. He believes that everyone is capable of great success and that success is not limited to anyone or anything.

Not only is he working to encourage and uplift, Franklin also finds himself juggling other responsibilities in his new position.

Franklin has had a long-standing interest in counseling. Driving Franklin’s passion is his innate care for people who have “slipped into the cracks” and his ability to relate to how people are feeling in new situations.

Franklin grew up in Kansas City, Mo., which has allowed him to better recognize the adjustments students must make when relocating to a small town.

“I got involved in counseling because my family struggles with communicating,” Franklin said. “I also wanted to help people like me who are dealing with coming from a big city and adjusting.”

From Kansas City to Orange City, Franklin feels that the journey that brought him to NW was meant to be.

“My classmate, Chelsea Town, was beginning to apply for the position at NW,” Franklin said. Eventually, Town decided not to pursue the position, but according to Franklin, “she told Kevin [McMahan] that she had the perfect person in mind. That person was me.”

Town wasn’t the only one who saw Franklin as the perfect person.

“I first heard about Rahn towards the end of the year last year when I—(as well as) Chris Butler, Angelica Perez and Brett Busch—were determining the right candidate for our new position on campus,” said sophomore Meghan Green. “I was a part of the interview process for determining which person would get this position. I thought he would be the perfect addition to the NW community. I told Kevin McMahan we have to have him on campus.”

Senior Brett Busch, another member of the selection committee, agreed with Green and is pleased to have Rahn on campus.

“One thing I really like about Rahn is he is always smiling,” Busch said. “The guy invokes happiness in people merely by his presence. His genuine faith, upbeat personality and substantive character make him a dynamic addition to the NW staff.”

Franklin is available for students in the International/Intercultural Services Office, located in the Rowenhorst Student Center. 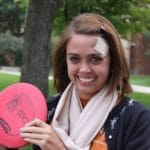 The boy who cried ‘disc’