It took a three-hole playoff, but freshman Isaac Knock took home first place at the Midland Spring Invitational at Tiburon Golf Club in Omaha, Neb., this past Wednesday.

Knock finished the round even at par (72) and in a tie for first place with Fernando Arzate of Bellevue College and Grant Maser of Nebraska Wesleyan. In his first victory as Red Raider, Knock went birdie-par-par to win the three-hole playoff.

Northwestern’s JV and Varsity squads finished in the top 10 out of 14 teams. The varsity took fifth with a 306, and the JV took sixth with a 308. Doane, Concordia and Bellevue tied for first with a 300, just 6 strokes ahead of NW’s varsity, and 8 for the JV. Midland placed fourth with a 303.

Senior Evan Schuler tied for 21st with a 77, and junior Austin Reitz finished one stroke behind Schuler with a 78, which earned him a tie at 26th. Senior Colton Kooima (T32-79) and senior Justin Kraft (T43-81) finished off the varsity scores for NW.

“It was great to get outside and play,” Van Ostrand said. “We have been itching to play all spring and are glad this tournament did not get cancelled.”

NW looks to capture its fourth straight GPAC title in the final two-day GPAC qualifier coming up on Monday, April 23 and Tuesday, April 24. 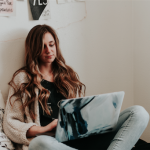 Blogs serve as a creative outlet