The Northwestern track and field team started off the month of March with a bang while competing at the indoor nationals in Geneva, Ohio.
The Raiders left the meet with a national champion, three All-American events, three more advancing to the finals in their events and four new school records.
The top story from the meet was sophomore Matt Huseman leaping for a national title in the high jump and setting a new school record in the event. He jumped 6-11.75.
Winning this event is credited to Huseman having more cleared attempts than the other finalist,  Herb Gary, from Indiana Tech. This was a perfect ending to the great indoor season that included five first place finishes and a conference championship.
”It was awesome to win it,” Huseman said. “It’s something I’ve been working toward for the past year. Especially after coming close in the outdoor last season. I trained a lot this summer to be able to put myself in a position where I could do well.”
The close call Huseman referred to was placing second at the conference meet and fifth at outdoor nationals last spring.
“I’m thankful that God gave me the opportunity to use my talents for His glory. At the end of the day all you can really do is go out and compete, have fun with it, and let the chips fall where they may.”
The women’s side of the team is proud to have the 4×800 also winning All-American honors. They finished in seventh place and ran a time of 9:15 minutes. The team consisted of senior Teresa Kerkvliet, junior Brianna Hobbs, freshman Sara Edwardson and sophomore Dawn Gildersleeve.
“Our women’s 4×800 was strong and they ran very well,” Huseman said. “They put a lot of hard work in this indoor season and it showed. They have great runners.”
Gildersleeve made another appearance in the spotlight running the third fastest time in prelims for the 1000m (2:55). She set a new school record and advanced to the finals where she finished sixth.
“Dawn did very well again,” Huseman said. “She ran a lot that week and her performance was very strong. I mean, she  had to turn around and run more the next day. She has a huge potential,  and it will be awesome to watch that unfold.”
Senior Krystina Bouchard finished eighth in the 600m finishing in a time of 1:35 minutes.
“Kristina showed a lot of perseverance and fought through an injury to place and be an All-American,” Huseman said. “I really thought that she exemplified what our program preaches as far as pushing through and always finishing. She gave a phenomenal effort and we were very proud of her.”
Hobbs also placed 11th in the 800m with a time of 2:19 which was just short of advancing to the finals. Kerkvliet finished the meet in the 15th place spot running for a time of 3:11 minutes.
Another mens athlete finished well at the meet. Freshman Logan Hovlan finished in the seventh spot overall in the 1000m with a time of 2:31 minutes.
“As a team I think we have the potential to send a lot more people to nationals,” Huseman said. “We were very close with multiple people, and I look for that to push them in the outdoor season. None of us are content with what we have done or where we are at, so I think this outdoor season will be great.”
The Raiders will begin their outdoor season on March 31st, when they travel to Pella for the Central Invite. 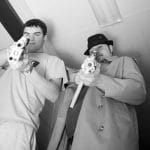