The Northwestern College track and field team headed to Olsen Stadium in Sioux City last Friday and Saturday to compete in the Sioux City Relays. The Red Raiders won four events and finished in the top-five in 17 individual events and eight relays.
“(The team’s) preparation has been good up to this point,” junior Jeriah Dunk said. “I think we definitely should make the top three or four at conference.”
Sophomore Karen Hutson had yet another exceptional weekend and finished in the top five in three individual events and one relay. Hutson won the women’s 400-meter hurdles in 1 minute and 2 seconds, almost four seconds ahead of the second-place runner, and met the NAIA national meet automatic-qualifying standard in her first time ever competing in the event.
Hutson finished second in the 100-meter hurdles with a time of 14.9 seconds and second in the long jump with a leap of 18 feet, 6 inches, again meeting the NAIA automatic-qualifying standard. Hutson then joined up with sophomore Megan Walhof, junior Jackie Niewenhuis and freshman Lauren Spranger to compete in the 4×400-meter relay, in which they finished fourth.
Freshman Kelly Thurman won the women’s 5000-meter run with a time of 19:33. Fellow Raider sophomore Amber Sandbulte finished second in 19:37.
Junior Matt Huseman continued his domination in the men’s high jump by clearing 6-09 to win the event and meet the NAIA automatic-qualifying standard.
Sophomore Levi Ettleman finished second in the men’s shot put with a toss of 50-06, and senior Jordan Boekhout placed second in the men’s javelin with a throw 182-10. Sophomore Dalton Kelley placed third in the men’s discus with a throw of 150-10.
Sophomore Adrianne Bishop won the women’s hammer throw with a toss of 131-05, and teammate and fellow sophomore Jena Krebs finished fourth with a lob of 118-06. She also finished fifth in the discus with a throw of 125.
Spranger and fellow freshman Callie Buske finished second and fourth in the women’s 400-meter dash with times of 1:00 and 1:03, respectively.
Senior Kendra De Jong finished second in the women’s high jump with a leap of 5-02 1/4.
Dunk placed third in the men’s 100-meter dash with a time of 11.03. Dunk then teamed up with sophomore Jordan Micalef, freshman Alex Van Roekel and junior Jesse Selgeby for the men’s 4×100-meter relay, in which they finished third with a time of 42.1. Micalef also placed third in the men’s long jump with a leap of 21-10 1/4.
“Losing (Brandon) Hammack was a big blow to our team,” Dunk said. “Micalef’s done a great job of stepping up. I think that if we run our best race we can make it to nationals.”
Bodin then teamed up with sophomores Logan Hovland and Skyler Giddings and freshman Kyle Anderson for the men’s 4×800-meter relay, in which they finished second in 7:48. NW’s sprint medley team, made up of Martinson, Johnson, Waltz and junior Austin King, finished fourth with a time of 3:38.
Freshmen Elliot Stoltz and Caleb VanderBaan were joined by senior Adam Potter and sophomore Jose Martinez to run the men’s distance medley, in which they finished  third in 11:33.
This Saturday’s Red Raider Open has been cancelled due to the weather. 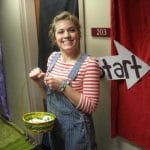