“I chose to do (a recital) to show all the hard work I’ve put into my lessons,” Kutzner said, “to set a goal and to give something to my peers and the public.” Kutzner said that she didn’t want to keep all of her years of practice and growth to herself.

Kutzner’s recital repertoire was collaboration with her percussion teacher. “He suggested songs that would be appropriate,” Kutzner said, “and then allowed me to choose based on my own interests.”

The show will feature a mix of four pieces on a variety of percussion instruments. “The first piece is a multi-percussion solo with four tom-toms and a cowbell,” Kutzner said. “It’s relaxed, fun and somewhat obnoxiously loud.”

The second piece is more reserved but leads into a dynamic last two pieces. The third piece is an extended marimba solo. “It’s a minimalist piece, very rhythmic and repetitive,” Kutzner said. “It’s supposed to be mesmerizing in the way that it’s listened to because of its repetitiveness.”

The final piece is a trio on mallets with junior Ann Calsbeek and senior Charlotte Richards. It is an arrangement of a piece by Belá Fleck, a banjo player with roots in bluegrass, fusion and post-bop. “I’m really excited and honored that I get to be in (Coralyn’s) senior recital,” Calsbeek said.

Kutzner will graduate in May with a general music major but will return in the fall to finish up her Spanish degree. “After, I’m hoping to go to grad school,” Kutzner said. “I don’t know if I want to go for Spanish or music yet.”

What Kutzner is sure of is her passion and love for music. “I hope to continue playing for as long as my physical body will allow, either through symphony orchestras or just in the community,” Kutzner said. “I also hope to teach percussion and maybe have my own ensembles with high school and college students, and not just teach them how to play, but also teach them how to have the love for the instrument that I do.”

The recital will also feature juniors Sarah and Rebekah Stofer. Rebekah will perform a number of solo pieces on French horn. “I chose solos that include a wide variety of styles and technical challenges,” Rebekah said.

The twin sisters worked to combine their talents as well. “Sarah and I also decided to play three duets together,” Rebekah said. “In order to make that happen, she had to transpose the horn part to trombone.”

Both students hope the recital piques the interest of the audience. “Hopefully we can inspire them to explore other genres of music that are unfamiliar to them,” Rebekah said. “We also hope they will enjoy the sense of working together to make music while having fun.” 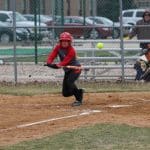