Unplanned and entertaining: Northwestern’s student-lead improv group, the Black V, brings many smiles and laughs to the campus. The 12 members of the Black V are varying in grades, majors and backgrounds However, they arebound together to have fun, makeing people laugh and being a stress reliever among the students.

Many of the members decided to join the Black V because of the relationships they already had with a few members of the group. Members of the Black V for this year are Jillian Simon, Alyssa Glanz, Michael Hornback, Rachel Smart, Jess Nibbelink, Grace Spencer, Colin “Rex” Kaemingk, Tabitha Thatcher, Collin Verschoor, Jack MacGreggor, Gideon Fynaardt, Rebekah Phifer and manager Riley Rasmussen.

“I originally wasn’t going to audition, but a senior friend of mine on the V basically roped me into auditioning,” senior Black V member Rachel Smart said. “When I got on, I decided to join because everyone seemed so kind and fun, and they really did seem like a tight knit family, which every freshman wants to find their first semester here.”

The members of the Black V have common goals in mind whenever they perform: have fun and make people laugh.

“I think the Black V’s main purpose is to entertain people,” freshman Jack Macgregor said. “Keep them interested, make them laugh at a one-liner and make them forget about the bad in the world.”

The members of the Black V have unanimously agreed that being on the V has helped them grow in their confidence and has led them to step out of their comfort zone.

“One way it has helped me grow is through my social skills: I find that it is now easier for me to approach and talk to people on campus now that I have joined the V,” freshman Collin Verschoor said. “Another way it has helped me grow is in my acting ability. Because I’m in theater I’ve been able to take aspects of the V such as staying in character into account when I am performing for shows outside of the Black V.”

Most of the Black V members claim that the group is synonymous with family.

A shared favorite memory of the Black V has been the most recent show on Halloween- their “Valloween” show.

“My favorite memory of the Black V so far has been the Halloween show we just did,” Verschoor said. “I felt like we were very cohesive and had a great audience which just made for a really great show altogether.”

However, all this fun interaction between the Black V and their audiences would not be possible if not for Black V manager junior Riley Rasmussen.

Some recent off-campus opportunities the Black V performed were an improv workshop at Unity Christian High School on Thursday, Nov. 4 and a murder mystery show for the Orange City Fire Department Banquet on Monday, Nov. 8. Rasmussen is also currently communicating with out-of-state locations for the Black V to perform.

Both students and the Black V are looking forward to upcoming performances, both on and off campus: a November show, date to be decided, and an improv workshop at Sioux Center Christian on Friday, Dec. 10. 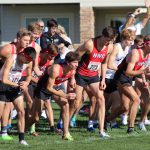