As the Red Raider men’s and women’s teams pulled up to Landsmeer Golf Course on Nov. 6, they knew that this meet was meant to be.  Clear skies, lots of green and a big, beautiful sun greeted the runners on a seemingly perfect, fifty-degree morning.  Lots of excitement, nerves and anticipation was felt amongst all runners as the Raiders looked to host their first GPAC conference meet during head coach Scott Bahrke’s tenure at Northwestern.

“I appreciated all the work of Coach Carrie Krohn and Coach VP.  We worked most of the week getting the course ready for Saturday, and so it was a relief when the gun finally went off for the women’s race,” said Bahrke.

The women participate in a 5k which is a little more than 3 miles, they were fearlessly led by senior Morgan Marker as the start gun went off at 10:45 that morning.  She was followed closely behind by sophomore Katlyn Weise, as the Raiders looked to get qualifying spots at NAIA nationals in Vancouver, WA.  Marker ended up crossing the finish line in ninth place in a time of 19:25, followed by Weise in thirteenth place with a time of 19:35.  Both women earned all-conference honors, while the women’s team as a whole finished in sixth place Only Marker earned a national-qualifying spot and will represent the women’s team next week. Following the national meet, the women will graduate three seniors.

For the men they participate in an 8k which is just short of give miles, the team was led up front by senior Ian Wiersama, closely followed by seniors Levi Cross and Dawson Jacobsma. All five scorers for the men’s team were seniors.  However, Wiersma alone earned a national-qualifying and all-conference spot, crossing the finish line in eighth place with a time of 26:40.  Overall, the men’s team finished in third place in the GPAC. They will say farewell to eight seniors this year, seven of which have competed for the Red Raider cross country team the past four years.

When asked about the races overall, Bahrke said, “We had two exciting races, and I felt that our Raiders left everything they had on the course.  I am very happy for both Morgan and Ian and am glad those two seniors get to compete at nationals next week.” 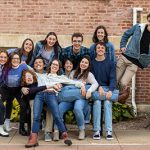 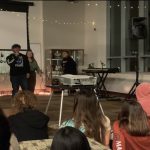