Home News Intramurals kick off this week on green
News

Walking out to the green on Tuesday night, you could not miss the crowds surrounding the sand volleyball pit and bean bag boards by the Science Building.

Friends and other competitors sat on the grass and enjoyed watching the competition and being in the company of one another in the beautiful fall weather.

While other school sporting events are being canceled due to COVID-19, intramurals are just starting off allowing students to watch the competition and cheer on their friends. NW boasts of 20 intramurals, but the fall season and COVID-related restrictions have only allowed for two sports so far.

The fact that intramurals are still happening despite many other activities getting canceled on campus and in the community has been a draw for some.

Sydney Mouw, a sophomore business major, said she decided to do intramurals because “it was something to do… and I want a T-shirt,” after her team, the “Holy Baggers,” started the season with two wins and eyes on the season champion T-shirt. However, this is just one of the many reasons people decided to participate.

Even student-athletes have been enjoying participating in intramural sports.

Azariah Schaefer, a sophmore psychology major and decathlete for the NW track team, said he joined intramurals because he loves the fun of sports.

“It’s nice to get a break from super competitive interactions,” he said. “It’s nice to have fun and not worry about being the best.”

While some take intramurals seriously, many participate more casually.

There have even been efforts with the volleyball league to have two divisions, separating the more casual players from the serious ones. But there are bigger issues brewing.

COVID-19 and the regulations that have come with it have caused quite a stir. Intramurals are no exception.

With the implementation of the event risk calculator and restrictions in the Rowenhorst Student Center, many intramurals we have seen in the past aren’t taking place this semester.

However, this all could change with time. Intramural sports such as basketball have been put on hold due to the four-court area being filled with chairs and used for chapel.

Since the equipment has been rearranged in the DeWitt Physical Fitness Center, the pool table has been moved out, taking that off the list of possibilities temporarily. Once the virus spread slows and the four-court area is cleared, there should be a lot more opportunity for different sports to be offered.

The first set of intramural sports offered this semester are sand volleyball and bean bag toss.

While the season has started and team signups have closed, there are still plenty of ways to get involved. One thing you can do is talk to one of the sand volleyball teams about joining for the rest of the season. You could also wait for signups for later intramurals sports.

Even if you don’t want to play, you can simply go join everyone else on the green every Tuesday and Thursday nights cheering on their friends. Whether you love competition, want to find a fun way to stay active or simply enjoy meeting new people, intramurals provide a way to get involved on campus.

What is up with the Hub? 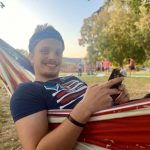