After six months of spending time cooped up in our homes, we all got a bit restless. Some people took up new hobbies like knitting, bread making, scrapbooking or origami. Others chose to finally binge-watch all of the shows in their Netflix queues. And then there are the ones who answered the call of the wild.

According to the RV Industry Association, RV sales this summer hit a record high with over 37,000 sold in the month of June. People wanted to explore the world from the comfort of their own home, a mobile home. Most spent their time touring national parks and natural wonders while soaking in the summer sun.

What many travelers may not have realized was how beneficial this was for their health.

Harvard Health has been touting the benefits of spending time outdoors since 2010. In their yearly newsletter, they included an article on the prescription for better health. The one medicine: step outside for five minutes each day.

Sun helps boost your Vitamin D levels, which has been shown to fight disease. Infection studies suggested that Vitamin D may have protective effects against everything from osteoporosis to cancer to depression to heart attacks and stroke.

Not only does physical health improve, mental health does as well. Sunlight elevates people’s moods. Researchers at the University of Essex in England reported results showing that just five minutes of green exercise resulted in improvements in self-esteem and mood.

By green exercise, they do not mean staring at a fake landscape on a treadmill while you run.

People respond to the natural world. Some even heal faster. University of Pittsburgh researchers reported in 2005 that spinal surgery patients experienced less pain and stress and took fewer pain medications during their recoveries if they were exposed to natural light.

Even though just a few minutes outside can impact a person’s whole day, the average American still spends 90% of their life indoors, according to an Environmental Protection Agency report.

So, how can college students break this trend and start reaping the benefits of sunlight?

Some students may try to convince their professors to have class outside. And if that doesn’t work, they always have the option to study outside the Learning Commons or in the new outdoor science plaza that has been equipped with plug-ins.

When you’re done with homework or need a study break, take a friend or significant other on an outdoor walk either around Orange City or on the Puddle Jumper Trail only a block from campus.

At mealtimes, the Caf and Hub now always offer to-go options that can be used for picnicking or hammocking with friends.

If you have a set of golf clubs, you’re set for the campus game of gennis, a combination of tennis and golf. But if you don’t have a set, then grab a frisbee and a friend.

The Adventure Club was founded this year by Sierra Tumbleson and Azaraiah Schaefer with the intent of spending time with God and creation while in community with others.

“People should join the adventure club if you want to meet other people on campus who love the outdoors and growing closer to God by being in nature,” Tumbleson, who is club president, said.

The club plans on hosting an event each month that corresponds with the season. During each event, they will also have a message that correlates with the activity to connect people to God.

The first event is a simple, get-to-know-you walk at the Puddle Jumper Trail Sunday, Sept. 27, at 1 p.m. For anyone wanting to join in the adventures, contact Tumbleson or follow the Adventure club on Instagram @nwcadventureclub. 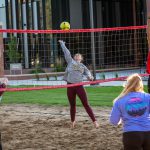 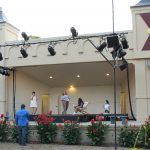