“Forever If Ever” is one of those albums you can put on repeat on your iPod for hours on end, without ever skipping a song.

Featuring 12 songs about love and heartbreak, including upbeat tracks like “What I Want” and “Without You Now,” and emotional ballads such as “I’ll Follow You” and “Maybe It’s Over,” (featuring Xenia from “The Voice”), Jon McLaughlin is back.

With a wide variety of tracks, McLaughlin shows off his exceptional songwriting skills once again.

“Forever If Ever” is McLaughlin’s third record, but his other two albums don’t even begin to compare to this latest release in terms of musicianship. McLaughlin himself even has said that this record is the one of which he is the most proud.

After over two years of writing songs for his new record and struggling to find a label, McLaughlin decided to do it all himself. He used his own band, recorded the songs he wanted and played them how he wanted them to be played. The album was all Jon.

The end result is absolutely fantastic—his style and soulful voice shine through undeniably.

One of Jon’s main goals in the album was to bridge the gap between what McLaughlin’s fans heard on his CDs compared to what they heard at his concerts. By imagining the effect of a certain song on the concert mood, and how the audience would react, he accomplished this goal.

This album sounds more authentic than past albums, lacking the feel of an overproduced record.

It can easily and honestly be said that this recording demonstrates a true vocalist at his finest.

Fans of vocalists such as Kris Allen, Gavin DeGraw, Elliot Yamin, Brandon Heath, Lee DeWyze or David Archuleta, the pop, indie, or piano-rock style music should make sure to check out McLaughlin “Forever If Ever.” 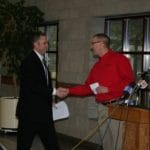