Karnish is now the eighth head coach in the team’s history.Karnish played soccer and graduated from Northwestern in 2011. He was an all-conference midfielder his senior year for the Raiders. Following graduation, he served as an assistant coach for the boys and girls Fairmont Cardinals team in Fairmont, Minn. He also worked as director of coaching for the 2011-2012 year at the Fairmont Soccer Association, a grade-school club organization.

“I knew I wanted to do something in sports, and I realized how much of the coaching part that I liked,” Karnish said. “We had a full business side and coaching side of the spectrum. On the business side of things there weren’t people that meshed well with me, and it wasn’t that comfortable of an experience. I knew that with coaching, it was something that I could really have an impact on people’s lives.”

Karnish served as head coach for the JV men’s team last fall; he was hired as the women’s coach this July. After having to wait for training camp week to meet the team, Karnish reached out to all of the players to introduce himself and prepare them for what was to come in the fall.

“There is a lot of transparency between all of us,” Karnish said. “We are open and honest with one another, and that has created a good bond between us.”

Karnish added that, there is not much of a difference coaching on the girl’s side of the sport and that it has provided him with a new excitement and passion for the game.

“We have fun,” he said. “There is a really big part of sports that is fun, and we really try to bring that out. Working hard together and working to have some fun always brings a good team atmosphere.”

Karnish attributes his successful transition in his new position to the culture created by the girls throughout the years. He believes that because they have already developed relationships and a strong culture.

This year’s team has faced some adversity thus far, but Karnish and the squad have high hopes.

“In everything we do, whether it is playing in a game and coming out victorious or with a loss, we play for God,” Karnish said. “Not just with soccer but with our service in the community, our growth with our families and our involvement in this campus. We do it in His name.” 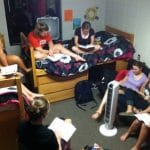