Processed with VSCO with preset

Over the past few weeks, there has been one very popular topic of conversation among students: Library Cat. How the cat came to be a part of campus is unknown, but the impact he left is astronomical. Library Cat’s name is up for debate, but many seemed to call him Titus, Greg, Crunch, Smokey or just plain Library Cat.

Alyssa Glanz first saw Library Cat at Steggy Keggy. Those waiting in line let the feline come inside the warm entryway, where he soon curled up in a corner and watched the commotion before him. Glanz last saw the cat on Oct. 25 when she sat with him outside, showing him an abundance of love and affection.

“He is such a sweet boy, and he was a joy to spend time with,” she said.

Some students let him into the entryway of Christ Chapel and the Learning Commons, also known as the LC, to escape the cold, too. Others have also reported seeing Library Cat outside of the LC. It was one of his preferred spaces, one where many students interacted with him. Even though it’s uncertain how Library Cat came to be at Northwestern, the love students had for him was obvious.

“He warmed up to us really fast and was always willing to greet us when we walked by,” she said.

Delanie Coady took it upon herself to cut up some beef and turkey from the cafeteria for Library Cat’s supper. She also brought him a blanket on a cold, rainy day, along with petting him each time she saw him.

Coady wasn’t the only one feeding him.

“Honestly, I almost started carrying around cat treats, so I could feed him when I saw him,” Rachel Smart said.

Kelsey Epp and Sydney Kolb, roommates in Bolks B, also interacted with the cat. Epp first saw Library Cat outside of the LC sleeping, and later she found him in the exact same spot. The next day, the cat followed Epp home where she brought him water and chicken soup, and he immediately gobbled up the meal. They were both extremely worried about the cat’s well-being, so they constructed a cat bed out of cardboard and duct tape. It was obvious he had never been in a cat bed before, so he was nervous at first. However, once he realized how warm it was, he hopped right in.

“He slept so cozily all night long and once the sun came out, he was up socializing with students again,” Kolb said.

Library Cat stayed a following night outside of Bolks. During those couple of days, Epp was contacting community members, trying to find Library Cat a permanent, loving home, knowing it was only going to get colder. Luckily, Professor Keith Fynaardt offered his farm as a home for the cat.

“He was nervous about his new home,” Epp said. “But I think it will be much safer for him, and he will have a reliable source of food.”

Kolb is happy that Library Cat has a new home.

“He will have less threats to his life on the farm as well as regular meals and woods to explore with his new feline friends,” she said. “On campus he was surviving, but now he is thriving.”

These students and many more had positive interactions and memories with Library Cat. However, we can all find peace in the fact that he is at the Fynaardt’s farm, prowling the wilderness and escaping the oncoming winter in his new, warm barn. Library Cat and his friendliness will be missed by many on campus. 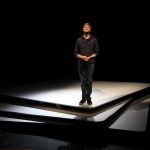 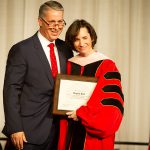