“Looper” doesn’t just play with the concept of time travel—it takes viewers along for the ride.

Joseph Gordon-Levitt and Bruce Willis complement one another perfectly as they play the present and future versions of the same character. Gordon-Levitt is the smooth-cheeked, arrogant, mob-employed killer with nothing to lose, and Willis fleshes out the role further as the grizzled old-timer carrying the weight of Gordon-Levitt’s life choices on his shoulders.

The film utilizes time travel well, to connect past, present and future in a thrilling mix of cause and effect. What happens to the present version of characters affects their future selves.

The story of “Looper” may seem like it could trip up audiences with all the time hopping, but the film presents the tale easily enough that you won’t leave the theater scratching your head and wondering what just happened.

“Looper” takes place in a not-so-distant future and maintains enough of a realistic view that the film isn’t far from the possible.

The story does perhaps dabble a bit too far into the science fiction realm that could turm off a few people, but for the most part, the action and suspense of the film are of the highest caliber.

It’s more than just your high-octane action flick with the sci-fi effects and story; there are twists to be taken in following the “loop” of this film. You remain unsure of how the connection between present Levitt and future Willis will be bridged until the very end.

See the film for its fresh take on the old workings of time travel, a great cast and gun-slinging thrills till the very end. 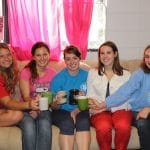