The Kind Red Spirits recently released their second full length album, The Red Album, after an almost four-year hiatus since their self-titled album came out in 2014. The Minneapolis-based band has grown tremendously in four years which can easily be heard throughout the record.

Justin Robb, the lead vocalist and lyricist for all the tracks, pours his heart and soul into songs that hold personal significance as well as significance to the other members. These guys have been waiting anxiously to create this sophomore album, and, with the help of their fans through a Kickstarter campaign, finally did so.

The Kind Red Spirits kick off their album with a sick guitar riff in “Broken World Blues” that picks up into a fast-paced anthem paying homage to their rock-and-roll roots. The tracks then take a journey telling different stories such as that of a wayward son in “Lonely Road” who has seemingly lost his way from his family but always has a home one call away.

A similar sentiment is shared in “The Wanderer,” where Robb shares his experience of not being able to find a home for himself and someone he cares dearly about.

The band also spreads its wing in the styles of music that they cover. Along with their rock songs, the band is very versatile in their ability to adopt multiple genres of music like soul, folk and grunge. This album is also particularly varying in song style ranging from ballads that gradually grow throughout the track to high-velocity rock and punk rock.

Along with a variety of genres that the Kind Red Spirits covers, they have added violin and saxophone to their instrumental repertoire. The violin adds to the folk side of the album on tracks such as “For a Moment” and “Three Long Days”.

The saxophone really adds to the soul vibe that the Kind Red Spirits have taken on in this album and can especially be heard in “Younger Man” where multiple saxes have been layered to create harmonies.

The best track on the album, in my opinion, goes to “Broken World Blues.” You just can’t beat catchy guitar riffs that build into epic rock-and-roll songs. David Gutsche’s drum work and Nathan Dean’s lead guitar lines are also phenomenally done on this song as well as throughout the rest of the album.

All in all, the album seems to revolve around sentiments of wayward wandering that happens in a new period of life. It centers on the feelings of being without a place you can call home and trying to find that home in other people and places. 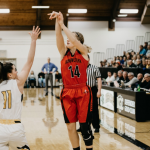