I am not an adventurous person.

This has always felt like something I needed to hide, a confession I must make to a priest behind a curtain. While the other kids climbed monstrous monkey bars, I dug through the sand beneath the swing set. While the other kids got back on their bikes after their fathers kissed their boo-boos better, I never touched a bike again. And while the other kids asked their crushes to the junior high dance, I stayed home watching the Disney Channel with my twin.

Those other kids were always aiming for the sky while I was caught up trying to figure out the mechanics of how to fly.

For a long time, I thought I was just being true to myself — refusing to give in to what society told me I had to do to be normal. But the gnawing feeling in my stomach told me differently: I was letting my fears get in the way of the person I could be, the person I desperately wanted to be.

Flash forward to Sept. 17 — the final day of my first time on the Black Hills Retreat and one month into my senior year at Northwestern. The sun was just starting to rise, but I couldn’t see it yet. Just outside Camp Judson, I stood at the bottom of Mount Baldy, craning my head, mouth agape, trying to fathom myself scaling such a giant.

I couldn’t. Forget my insane fear of heights and infamous penchant for tripping — Mount Baldy is exactly what the name suggests: bald. Victoria plus big, slippery rocks did not suggest a winning combination.

And yet, a dozen prayers and a couple curse words later, at 6:52 a.m. that Sunday, I had my very first mountaintop moment. For the first time in my life, I truly understood what it meant to be breathless.

My brain kept whispering that I was only halfway up, but my heart told it to shut up: I had never been so high in my life. My throat was tight with the reality of me — puny, perpetually anxious Victoria Horn — gazing out at the whole world rolled out like a blanket before me.

Softly, I heard God whisper the word we had spent all weekend meditating on: behold. In that moment, I caught a glimpse of the person I want to be, the person God wants to shape me into, and I haven’t been able to forget her since.

So do the things that scare you. Smile at that cute guy you keep running into at the Caf. Have that really hard conversation with your friend about why you’re upset with her. Invite that wing mate without fall break plans to join you on your adventures. Go out for coffee with someone you have had a friend crush on for the longest time.

And always, always, say yes to sunrise mountain hikes, because God is dying to take you up to his mountaintop and show you how the world could look every day if you just took that risk and trusted him. 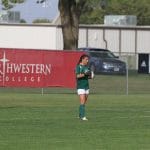 DACA program up for debate