It’s 2012; can we please all agree that banjoes simply are not cool?

Sure, the idea of using something with more twang, something with a quicker and more hollowed-out sound than the standard guitar, is a fun concept—like deciding to only wear bowties with your suits is fun. Bowties and banjoes will never be taken seriously, and for that reason, it’s hard to listen to Mumford & Sons as an album rather than a novelty.

After the success of 2010’s “Sigh No More,” Mumford & Sons came into the limelight of the folk, folk-rock and, subsequently, rock genres. For whatever reason, a larger following took to this Irish-brogue-tinted band than acts such as Flogging Molly (apparently bagpipes are too far gone even for fun’s sake) or Marcus’ ex-girlfriend, Laura Marling.

That dang banjo is partly to blame for their success, but admittedly, there were some great melodies on “Sigh No More.” We’ll never know if “The Cave” would have succeeded as much if played on guitar rather than banjo. Is it a great melody or just a unique little sound?

Perhaps their new album, “Babel,” released Sept. 25, only two years after their debut, could have kept their reputation as melody-makers alive, but the problem is, their new stuff has nothing catchy about it. There’s nothing you’ll get stuck in your head, nothing you’ll spend hours trying to pluck out on a guitar back in your dorm room, nothing you’ll even try to sing along to and no refrain you’ll feel like belting out again and again like you did after listening to “Sigh No More.”

“Babel” puts Mumford & Sons on level with The Proclaimers or Dexy’s Midnight Runners—fun, big-hearted guys with more charm than musical talent. Maybe it was impossible for Mumford & Sons to replicate the success of their debut album simply because that’s all the good stuff they had.

“Babel” drags on in the same sad, brewing fashion, this time driven by guitars, the banjo more subdued in the background. Although we enjoyed the way “Sigh No More” wavered between folk and rock, Mumford & Sons’ decision to embrace their rock side only makes us wish they’d have gone to the other side, embraced their originality, maybe got out another hit song (remember, “Come On Eileen” was a sophomore album success for Dexy’s) and got us over our infatuation with the banjo.

At “Babel’s” best, “Whispers In The Dark” gives the crowd something to stomp its feet along to, but most of the track seems like something the guys put out as quickly as they could. The guys should have waited and worked on some melodies that would blow away the audience’s minds, rather than simply satisfy their thirst for a little banjo fun. 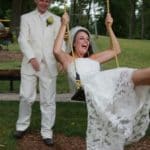