Hospers Hall is known across campus for hosting light-hearted events for all students to enjoy. Some crowd favorites are the annual Hospers’ Coffee House and Cardboard Duct Tape Battle. This year, senior Rex Kaemingk and freshman Collin Verschoor joined heads to dream up a new event for their building to host. Their dream became a reality Sunday, Feb. 27 when students from all across campus joined in the Proscenium Theater to watch the men of Hospers put on what they deemed as “the world’s worst pageant.”

Many across campus had heard of the event, but few knew what to expect when they walked in the doors. Regardless, there was still a commendable turnout that packed the theater. The event comprised of three main parts: introductions, talents and a question and answer session. Each round was scored independently by four selected judges: Michael Simmelink, Caylan DeLucia, Natalie Wheeler and Lucas Heiberger.

The scene was set for the night by lighting and sound designer, senior Wyatt Waage. The hosts for the night were Riley Rasmussen and Rex Kaemingk, opening up the night with introductions of the 14 contestants. The men walked out in “business casual” outfits, giving their best runway walk. The audience learned contestants’ names, grades, majors, hometowns and a fun fact.

For the next round, the contestants were asked to prepare a talent to perform for the audience. Little did they know that the founders of the event had a different idea in mind. Verschoor and Kaemingk had previously designed a “wheel of talents” which the contestants had to spin and perform whatever talent it landed on. These ranged from mental math, gymnastics, yodeling and everything in between. A crowd favorite was Owen Kolste’s impromptu magic trick that left everyone dumbfounded with its success.

When judge Simmelink was asked what his favorite part of the event was, he said, “The guys had no idea about the wheel of talents. I thought it made it especially unpredictable.”

The final round was a question and answer session in which the hosts asked the men a couple of questions and then turned the question-asking over to the judges. The catch with this section was that when the contestants walked out for their turn, they were wearing an outfit that had been thrifted specifically for the event. A lot of mouths were left ajar when Alex Nonhoff walked onto the stage in heels paired with a sparkly denim-on-denim overalls short set.

Contestant Michael Leon said, “Nonhof’s denim on denim, Sawyer’s poncho/cape and all the ‘90s vest and suits made it very entertaining.”

Hadyn Lee sure was “keeping it sassy” when he rode on stage with Heelys, yellow leggings and his shirt sporting that statement. The crowd might not even remember the answers to the questions since there was so much chatter about the thrifted outfits.

Audience member Emmy Wedgbury said, “My favorite part of the event would have to be the creativity that we got to see in round three when all of the contestants came out with their thrifted outfits! My friends and I could not stop laughing, and we got to see the personality behind each of the guys.”

At the end of the rounds, the audience was asked to vote for their favorite contestant while numbers were crunched to see who the judges picked as Hospers’ Hottest 2022. Everyone waited in suspense until it was announced that Lee had won People’s Choice, but Leon had taken the ultimate title of Hospers’ Hottest. The awards did not stop here. Every contestant received a specific, individual award. Brady Lamansky took home the trophy for “the boy you’d bring home” while Evan ‘Crankshaft’ Myers won the Rex Kaemingk award for having a nickname that has nothing to do with your real name.

While the event is named Hospers’ Hottest, the goal was not to see who Hospers’ most attractive resident is.

Vershoor said, “If there is something that I hope Hospers’ Hottest adds to campus it’s the three pillars of Hospers: hospitality, humility and respect.”

The men of Hospers Hall have something special going on, a culture that extends past the wall of their dorm. They continue to make all of campus laugh with their light-hearted humor and initiative for fun.

Kaemingk said, “I thought it would be fun to create a tradition that could last, and so I hope that Hospers’ Hottest can be a pageant that students talk about 10 years from now, and hopefully they have no clue how it started but are happy it exists.” 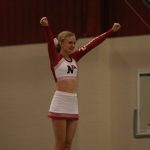 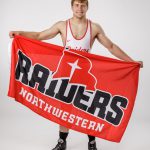