Last week the Raider Men’s soccer team jumped on a plane headed for LAX.  After a beautiful day on the beach, the team squared up against #14 Marymount California University for what turned out to be a dog fight through and through.

The relentless California sun combined with the radiating turf made for tough conditions for both sides.  The Raiders opened the scoring just 11 minutes in with Mateus Freitas picking out Tyler Limmer on a quick counter to go up 1-0.  The remainder of the half consisted of back-and-forth pressure by both teams with Northwestern unable to find the back of the net again in the half.

Marymount refused to go away as they often looked to go route one via their center backs, but to no avail.  The score remained 1-0 at halftime.

The Raiders opened the second half scoring less than one minute after the whistle with Mateus Freitas again providing the assist, but this time to Anselmo Kim whose shiftiness proved too much for the Marymount backline as he pounded the ball into the net from the top of the box.  It appeared this 2-0 lead would put Marymount away, but they responded as any quality team does by pressing higher up on the field.  Their risk paid off by winning the ball deep in the NW final third and playing a probing ball into the center of the box where Marymount was able to capitalize to earn a goal back in the 53rd minute.

The game stayed tight until the Raiders were able to break away thanks to a gutsy near-post run by Alex Schussman who was able to get the slightest of touches on a low cross from Tyler Limmer outside the left edge of the box.  Schussman’s touch lifted the ball just over the sliding Marymount keeper, and the backspin of the ball caught on the turf and slowly rolled in before the Marymount defender could clear it, putting NW up 3-1.  Briefly after, Marymount received a straight red card, putting the game out of sight.  Marymount did score briefly after making it 3-2, but the Raiders held on for a convincing win.  The second game on the trip ended 9-0 after NW dismantled La Sierra.

The Raiders proved on this trip that they can win against the top teams at the perfect time, as conference play begins this Wednesday against Jamestown. 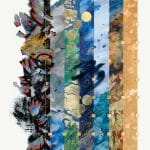