For Stegenga Hall’s new resident director Hannah McBride, living in a building surrounded by people is nothing new.

“My family is big! Six kids and two parents,” she said.

McBride grew up outside of Philadelphia, Penn. After graduating from high school, she began attending college at a state school.

There she majored in English and was a pre-law student, but she soon discovered she wasn’t satisfied. McBride started considering transferring to a Christian institution and discovered Northwestern.

“I wanted to have personal relationships with my professors, and I wanted to go to school with people I wanted to be like,” McBride said.

At NW, McBride switched her majors to English and theatre.She was a RUSH choreographer, an actor in various theatre productions and an employee at The Hub, yet she still did well in her classes.

After graduation, McBride began working as an admissions counselor for NW.

She said she loved her job because she could give kids confidence in a time when they were in doubt or stressed about their college decisions.

After two years as an admissions counselor, McBride said she felt God calling her to Opelousas, La. to work with the nonprofit agency Hope for Opelousas.

McBride specifically worked to revamp the organization’s communications department. She wrote publications and advertisements and redesigned their website.

“Moving to Louisiana was harder than I expected, but God taught me how to identify goodness even in hard situations,” McBride said. “Every day caused my faith to grow and me to have to sacrifice giving up parts of my pride and expectations.”

As her year of working with Hope for Opelousas neared its end, McBride began thinking about her future plans. Her former RD at NW called and encouraged her to think about returning as an RD herself.

At first, McBride said no. However, the more she thought and prayed about it, the more she became interested in the job, she said.

McBride called NW to ask if the job was still available. She discovered it was and applied. Later, she was offered the position and accepted it.

McBride is excited to be back at NW and living in Steggy.

She said her goal is to make everyone in the dorm feel they are seen, known and wanted. She hopes to accomplish this while coordinating hall events, balancing the hall budget, solving maintenance issues and attending meetings.

As someone who has spent much time at NW, McBride has advice for students.

“Take being a student and being engaged in the community seriously, don’t take yourself too seriously,” McBride said. “God has a way of growing us the most when we let go of ourselves and surrender to him.” 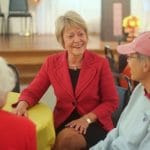