This past weekend was the Harvest Festival at Northwestern. It started Friday, Oct. 29, and lasted until Oct. 30. From a movie in the chapel to swing dancing, there was plenty of things to do.

The Harvest Festival was something new this year. Friday night there was a showing of the first lice action Scooby-Doo movie in the chapel.

Junior, Miriam Cary went to the Scooby-Doo movie and said, “It was a fun time and they even had Scooby Snacks. The numbers may not have been up, but our spirits were!”

Along with the movie, at 6 p.m. on Friday night, there were swing dancing lessons so that people could show off their dance moves on Saturday night in the Bultman Dance Studio.

On Saturday, there was a chili bash tailgate before the football game against Dordt. In addition to chili, there were many other soup options including cinnamon rolls.

After the football game is when the fun really began. Starting at 4 p.m. in the RSC four-court area was the harvest dinner where Creative Dining served pulled pork, beans, potato salad and pumpkin bars.

After dinner, there was a mechanical bull, an inflatable corn maze, pumpkin painting, carnival games, a table full of fall-themed snacks and a corn-eating competition. The corn eating competition was made up of students eating candy corn, popcorn and canned corn. There was also puppy play time for students.

The night ended with swing dancing which started at 7 p.m. with a swing dance instructor to help people out if they did not go to the dance lessons the night before. The dance instructor taught a group dance and it was incorporated into other dances.

Junior, Chelsea Hofer said, “I really enjoyed the swinging dancing. I grew up swing dancing, so it was neat to show my friends.” Join the celebration the Symphonic Band is throwing 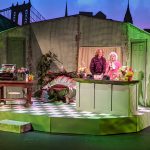