NW athletes won four events and posted 16 top-five and 27 top-ten finishes. Sophomore Anna Heusinkveld posted three top-five finishes in the sprint races, winning the 60m and placing second in the 400m and third in the 200m. Sophomore Caley Vink recorded her first win of the season, taking first in the shot put with a toss of 41-06, her second best throw of the season. Senior Sarah Lunn placed second in the mile (5:23) and then anchored a 4×400 relay that placed third with a time of 4:12. The relay included Muilenburg, Bosch and Harthoorn.

For the men, junior Peter Hollinger punched his ticket to next month’s NAIA Indoor Championships in the 1000m, taking first with a time of 2:31, which is third fastest in the GPAC and 14th best in the NAIA.

The Red Raider men’s team recorded 14 top-five finishes and 22 in the top-ten on the weekend. Senior Cody Bauman was one of three entries to take home a runner-up finish, placing second in the shot put and bettering his NAIA provisional mark with a toss of 51-00. The men’s 4×800 team of sophomore Sean Crowell, junior Caleb Benzing, freshman Josh Van Dusseldorp and senior Bryce Nitzsche took first with a time of 8:06. Sophomore Calvin Korver finished second in the pole vault (12-01.5) and fifth in the 60m hurdles. Tim Rose placed second in the 3K, with a time of 8:45.

NW will compete in the SDSU Indoor Classic on Feb. 16 and 17 in Brookings, South Dakota, in the final meet before the GPAC Championship. 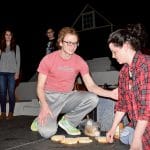 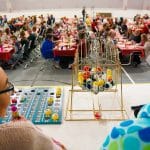 Dress up bingo planned for weekend