Next Thursday, the Northwestern theatre department will open the Tony and Pulitzer Prize-winning rock musical “Next to Normal.” With music by Tom Kitt and lyrics by Brian Yorkey, this musical has reached critical acclaim, receiving awards such as two Tony Awards for Best Original Score and Best Orchestrations. Along with those, “Next to Normal” is one of only 10 musicals to have won a Pulitzer Prize for Drama, the most recent being the hit musical “Hamilton.”

The musical centers around a mother who struggles with worsening bipolar disorder and the effects that her illness and its management have had on her family. Some major themes in the show are issues of grief, suicide, drug abuse and ethical issues in modern day psychiatry.

Sophomore Corrie Hayes, whose most recent musical credit was Princess Fiona in “Shrek the Musical” during Orange City’s Tulip Festival, talks about what it is like to handle such difficult subject matters.

“It’s such a heavy topic, and we [as an ensemble] all want to do it right and do it well,” Hayes said.

For Corrie, playing the mother in the show has also had its fair share of hardships.

“I want to get the character right, and I want to represent mental disorder in the best way that I can,” Hayes said.

When asked how this show is different than most NW shows, Hayes said, “It’s definitely a PG-13 show. It’s very heavy. There is humor, but overall it’s more in-your-face than other NW shows.”

Despite the weight of the topic, Hayes believes that the beauty of this show will allow audiences to realize that life is bigger than just us.

From a directorial viewpoint, Prof. Bob Hubbard emphasizes that this is a show that everyone should see.

“It’s about an American family struggling with an impossible situation. It’s about finding hope in a hopeless situation,” Hubbard said. “It’s about advances in mental health and yet our failure to understand mental illness and how to treat it effectively.”

With heavy themes such as these, Hubbard goes on to say that having rock and roll portray mental illness is inventive and appropriate.

“In some ways it gives us more insight into what it’s like to be inside the mindset of bi-polar disorder. I believe rock and roll is uniquely equipped to replicate that,” he said.

As Hayes and Hubbard previously stated, this show is tough and contains themes that may be hard for some audiences. However, theater artists feel called to hold a mirror up to nature. Through difficult subjects, they compel audiences to embrace the hardships of life and to continue fighting through it when things may seem hopeless. Fortunately for most people’s lives and for this musical, there is always a light in the dark.

“Next to Normal” opens at 7:30 p.m. next Thursday. You may reserve tickets online at nwciowa.edu/tickets, email the box office at boxoffice@nwciowa.edu, or even call at 707-7098. Tickets are free for Northwestern students/faculty and staff. $8 for adults and $4 for children. 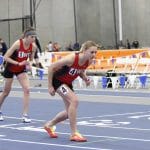