Over mid-term break, 18 Northwestern students, faculty and staff traveled to Grand Marias, Minn., for a retreat through the Coldwater Foundation.

With the first half of the fall 2012 semester done, many students agree that fall break is a much needed time to relax, regroup and refocus for the upcoming second half of the semester. Students who traveled to Grand Marias had the opportunity to do just that.

Seniors Morgan Stahl and Julie Adams co-led the women’s backpacking trip. Both led the trip last year and had positive feedback that encouraged them to do it again. Stahl and Adams put many hours of planning and prayer into this year’s trip.

“We structured the girls’ trip as a spiritual pilgrimage but with rest, adventure and bonding experiences (without) distractions,” Stahl said.

Junior Josiah Veurink led the men’s trip. Veurink did not go on the men’s trip last year but has led several Coldwater trips in the past. His agenda took a less structured approach.

The 12 women, six men and two faculty sponsors departed Friday afternoon for the nine-hour drive to Grand Marais. The group arrived at nearly 1 a.m. at a church where Coldwater had arranged for them to stay the night.

The next morning the men and women went their separate ways. The men left first to hike a trail on Pincushion Mountain and took some time to appreciate the beautiful scenery.

“We looked out over Lake Superior, and that was a really neat view,” said senior Tyler Zeutenhorst. “It was a bit foggy that day, but we got to see a lot of different trees.”

The men also spent time exploring Grand Marais. Freshman Trevor Delamater, originally from the Grand Marais area, showed the other five men around and took them to a restaurant where he used to work. The men also canoed at Poplar Lake and enjoyed another area restaurant across the lake.

Monday was dedicated to the work portion of the men’s trip. The six men worked on building a garage addition to a home that is going to be used for ministry through Coldwater.

Meanwhile the women spent the majority of their trip on a 20-mile journey on the Superior hiking trail. Each of the girls took turns leading and navigating the trails during their three-day hike.

Senior Corrine Muyskens was surprised at how well the girls worked together.

Sophomore Arynn Maznio was amazed by the breathtaking views.

“After a hard push up a hill, to see something so amazing, it refreshes you,” Maznio said. “You feel rejuvenated and more confident in yourself.”

Once the girls got back to Grand Marais, they joined the men for a celebratory dinner. The dinner was a time of fellowship and reflection of the past few days.

Zeutenhorst found the entire trip to be a growing experience.

“You feel accomplished, filled through your experiences and through the relationships you build,” Zeutenhorst said.

Muyskens said he found the trip to be a nice change of pace.

“It was an amazing time to have a mental break from life, to get away from technology and people and be alone in God’s creation,” Muyskens said.

Maznio was in agreement with many on the trip and said she appreciated the break from her busy schedule at college.

“Even just a couple days in the wilderness can change your perspective,” Maznio said. 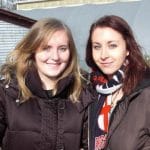