Northwestern and Dordt may be rivals, but they have a connection between two sets of students that goes as deep as their genes. NW students Jenni Kahanic and Chad Kischer each have a twin they’ve split with for college.

For Chad, a sophomore, and his brother Trent, the decision to part ways was academic.

“Trent went to Dordt mostly for his major, Agronomy,” Chad said. “I came here for ag business. Four of my cousins, my mom and aunt came here so we knew of the area.”

Familiarity also played a role for Jenni, a senior, and her sister Sarah.

“We are both local and knew both schools,” Jenni said. “Sarah liked the environment at Dordt, but it didn’t have any trees, it was all cement, and it didn’t feel as close-knit or fun as Northwestern. I could see myself being here more easily.”

The similarity and close proximity of the two colleges has bred a longtime rivalry, but the twins have a positive perspective on the difference.

“The rivalry is a joke, but we mostly forget it. Dordt is not the ‘other,’ it’s just another college,” Jenni said.

Even with the added element of competition, the Kischers agree.

“Going to different schools is kind of fun since we are in the same sports, cross country and track,” Chad said. “We get to see each other and compete against each other.”

Both sets of twins agreed that if they had gone to the same school, life would have been different.

“If we went to the same college I would not have reached out to find other friends. I’d be more shy,” Chad said.

“I’m glad we did [split up] because when you grow up as a twin they are with you every stage of life, which is wonderful. We wanted for our college experience to grow us into people who we were,” Jenni said.

“We can be independent without looking over our shoulder at what the other is doing. It eliminates the rivalry and the dependence, and it has actually helped us be friends instead of just sisters.”

Apart from the benefits of going to different schools, simply being a twin has its perks, according to the Kahanics and the Kischers.

“It has taught me how to have a close, intimate relationship with boundaries, how to care for others’ emotions and walk life together. We have our differences and those things helped make the boundaries between us easier,” Jenni said.

The Kischer brothers find being a twin gives them ample opportunities for playing pranks.

“We look a lot, a lot alike,” Chad said. “In high school we switched classes often and teachers never found out. We finally had to tell them.” 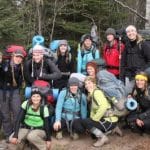