With experience in radio and newspaper, being an editor of a website and attending multiple film festivals (including Sundance, Toronto and Chicago International), Josh Larsen is well equipped to deliver a message about pop culture. On Tuesday, April 3, Larsen will be speaking in chapel about the biblical mandate to create and participate in culture, especially pop culture. Larsen hopes through his message that attendees will ask the question: “What if we approached this as a gift to enjoy, not a responsibility to bear?”

“I hope students will see the possibility of a different posture towards pop culture than one some Christians usually take, a posture that emphasizes God’s sovereignty over and goodness in the culture we encounter,” Larsen said.

Larsen’s interest in film began decades ago. His family was not only passionate about movies, but also about God. Larsen discovered his interests were in writing and literature throughout his school years. When he finished school, he began his career working as a journalist. Larsen wrote as a beat reporter for a weekly community newspaper, then became the film critic for Sun-Times Media — a Chicago-based newspaper publisher — for over 10 years.

In 2011 he became the editor of Think Christian, a digital magazine dedicated to readers who are both Christians and pop culture fans.

“As Reformed Christians in particular, we recognize God’s sovereignty over all of creation, including popular culture,” Larsen said. “To fully live into our faith, then, we cannot separate what we believe from what we participate in as art/entertainment. It’s our mandate and privilege to consider how our faith and our popular culture speak to each other.”

Part of his work on Think Christian is to critique films in the context of how they interact with God’s story: if there is a glimpse of the gospel, if there is evidence of our need for good news and if it contradicts our understanding of the world. Recently, Larsen has written pieces for Think Christian about the films “A Wrinkle in Time,” “Phantom Thread,” “Star Wars: The Last Jedi,” “Justice League,” “Blade Runner 2049” and “Dunkirk,” to name a few. He has also published other pop culture pieces such as topics on music in 2017, U2 performing on Jimmy Kimmel, Sundance 2017 and serving refugees.

In addition to working as editor for Think Christian, Larsen is also co-host of Filmspotting, a podcast exploring classic and current film. For each episode Larsen and the other hosts review a film and will sometimes share top five lists on different topics.

In 2017, Larsen published his first book “Movies Are Prayers: How Films Voice Our Deepest Longings,” where Larsen examined how movies are also expressions to God, whether those expressions are lament, praise or confessions.

Larsen will be visiting campus to speak in chapel on Tuesday, April 3, and later that day at 7 p.m. in the Vogel Community room. His messages will be engaging to students, faculty, staff and community members who have any interest in the relationship between Christianity and pop culture. 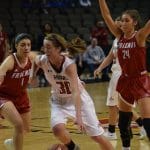 Switching the focus of love