Avril Lavigne is a pop punk name that everyone who was born anywhere near the 1990s probably had on their main playlist at some point or another. With hits that have both stood on their own and been covered by multiple groups, she has definitely made her mark. Her new album does not shy away from that legacy, instead, it bursts open a different set of doors entirely.

The pop-punk icon grew up in Canada and has released albums periodically over the past 20 years. She signed on to a record company at the early age of 16 and has received several Grammy award nominations. Lavigne made her stage debut with Shania Twain in 1999 and slowly over time was spotted by different artists, agents and executives who approached her over a period of two years, leading her to sign on with Arista Records and dropping out of school to pursue her music career. In 2002, she released her debut album, “Let Go,” with the top song being “Complicated,” a song that would work itself into the ears of everyone alive with an iPod at the time.

Her new album, “Love Sux,” has a different taste to it than the typical Lavigne song. In past years, the songs have fit into a category of pop or pop-punk. Oftentimes, there is a strumming acoustic or plucking electric or bass present with Lavigne singing with a sense of empathy or seeking to find the answers for something. However, this time, Lavigne is not playing around or backing down and jumping into the world of pop-rock instead of a pop-punk vibe with a post-breakup album. Instead of searching for answers, she is refusing any that the party she’s singing to could give.

Throughout the album is a semblance of the emotional trip that takes place after being betrayed or broken up with by someone trusted. The album explodes open with “Cannonball,” starting with a loud electric guitar sequence and Lavigne shouting into the mic that she is a “ticking time bomb.” The song carries a tone of anger and defiance. “Bois Le,” pronounced “boys lie,” also carries a tone of anger and defiance, but a feeling of hurt is carried with, “boys lie, I can too.” Many of the remaining songs, from “Bite Me,” to the title song “Love Sux,” up until “All I Wanted” all hold the anger, but it slowly fades away and becomes regret with a little bit of longing. Lavigne successfully conveys a progression of time and how the emotions involved in a breakup develop over time, involving some self-reflection along the way. “Dare to Love Me” serves as a little bit of a warning to whoever loves her next – the feel of “if you love me, this is who I am.”

A little earlier on the album falls “Avalanche,” which is the first song to take a step into self-reflection. Here, Lavigne starts to admit that the front of anger and defiance is just that, a front. Alongside opening up about being hurt, Lavigne also takes a page out of her own book. The song includes a lyric, “Tired of looking over my shoulder,” which sounds like a reflection on Lavigne’s first ever billboard song, “Complicated:” “You’re watching your back, like you can’t relax.”

Overall, this album is very atypical from Lavigne’s past albums. Leading up to now, albums and specific hits have taken more of a posture of patience and seeking answers. However, the emotions taken through this album are what one might say is necessary in the progression Lavigne’s previous hits have been taking, beginning the transition from taking a stand purely for others around her into taking a stand for herself. Are tablets harmful to child development? 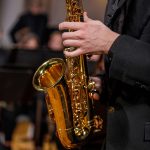 Two showcases: one saxophone and one voice