On campus, students see their professors daily. But a lot of students may not realize that many of their professors have hobbies outside of the classroom and their teaching responsibilities, including being published authors.

Along with being a published author, Barker is a professor of theater, department chair and the director of Drama Ministries Ensemble. He has written countless plays. A few with a specific subject in mind have been the focus of his most recent works. This book trilogy – “Sioux Center Sudan,” “Iowa Ethiopia” and “Zambia Home” – follow Arlene Schuiteman, a missionary nurse, as she travels from her hometown in Iowa to Sudan, Ethiopia and Zambia to do ministry and healing work.

“This is a story of Ethiopian history: both ancient history as well as modern history, and it’s a way of honoring that culture and honoring God’s work in Ethiopia by giving the story back to them so that the story can be kept alive in the next generation,” Barker said.

The first installment of this trilogy was released in March 2018. The second was released in November 2019. “Zambia Home” is yet to be published as a novel. However, all three books originally stemmed from shorter plays that Barker originally wrote to tell Schuiteman’s story.

Dr. Samuel Martin, a professor of English, has also taken history but blended it with fiction to try to face the harsh realities of the place he grew up in his first published work, “This Ramshackle Tabernacle.” Published in 2010, this work of short stories depicts some difficult but true realities that happened at the edge of rural Ontario’s woodlands – things like addictions, bullying, alienation, loneliness and murder.

“I wanted to look more directly at some of these hard realities I’d all but ignored growing up, and I wanted to do so in a way that affirmed the value of all the lives I wrote about, even those the larger world might dub failures,” Martin said.

After “This Ramshackle Tabernacle,” Martin has written three more books: “A Blessed Snarl,” religious fiction; “Burn Lisetta Byrne,” crime thriller; and “Hipswitch and Huggledug’s Christmas Heist,” a children’s book. “Burn Lisetta Byrne” will be published this fall 2020. Martin hopes to write a nonfiction book on spirituality, art and outcasts and maybe even a science fiction thriller. No matter what genre, Martin has something for every reader.

Lila Sybesma worked through her family history for 12 years before releasing her book “Yours: The Civil War, a Love Triangle, and the Steamboat Sultana” in April 2019. It involved the Sultana Disaster which was the deadliest Maritime incident in United States history. It is a tragedy mostly unknown in the U.S., despite its magnitude. Sybesma’s great great-uncle, Joseph Taylor, was one of the few survivors and the main character of her book. She found handwritten letters from Taylor that dated back to before and after the incident that inspired her.

Ever since, she was haunted by the ghost of her family history.

Sybesma said, “I had difficulty sleeping because the story was running through my head,” Sybesma said.

She would scribble notes on napkins in the car, on tickets at rodeos. Everywhere she went, ideas for the novel would integrate their way into her everyday life.

The fiction book follows Sybesma’s great great-uncle Joseph, his brother Gabe and Sarah Sutton as they write each other letters during the Civil War. The brothers serve with the Union Army until they are taken prisoner and sent to a Confederate prison camp. Sutton spends her time in battlefield hospitals and spying for the Union Army. It’s a story of love and loss all, intended to be as historically accurate as possible. Sybesma spent time at many of the sites and locations tied into the disaster in order to teach her audience facts while giving them fantasy.

These three professors show the power of written history from many different angles, even allowing for their own stories to be interwoven as well. All of these books, as well as countless others, can be found in the DeWitt Learning Commons and are available for checkout. 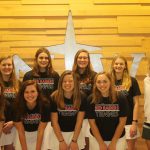