With temperatures already changing and pumpkin spice lattes back on the menu at Town Square, it’s hard not to get excited for fall and everything that accompanies it.

A fun fall tradition for many people in and around Orange City involves a trip to Pumpkinland, a farm located three miles north of Orange City on Jackson Avenue. Some of Pumpkinland’s major attractions include a pumpkin patch, a free petting zoo and a seven-acre corn maze.

Each year, the corn maze is cut into a different shape, and this year it’s a special tribute. Dave Huitink, co-founder and owner of Pumpkinland, passed away on April 14 of a sudden and massive heart attack at the age of 68. He was known fondly as “Grandpa Pumpkin,” and his loss was felt throughout the entire community.

After Dave’s death, his wife Helen and the rest of the Huitink family had a decision to make. Because Dave played such a central role in the business and life of Pumpkinland, it seemed like an impossible task to keep Pumpkinland going without him. Additionally, carrying on with “business as usual” just didn’t seem right without Grandpa Pumpkin, the one who started it all.

On April 28, the family announced that they were going to continue the fall tradition—at least for one more year—in loving memory of Dave.

After lots of talking and praying together, the Huitink family decided that the 29th year of business should be a tribute to Dave’s legacy. Since that announcement, the outpouring of support and love from family, friends, community and church members has been incredible.

“We’ve been so overwhelmed this year by all the love we have felt from the community and the many ways people have selflessly stepped up to help us make this year possible,” said Karli Lang, granddaughter of Helen and Dave Huitink.

Lang went on to say, “I have seen in a new way this year how much Pumpkinland means people. This business has impacted so many.”

What is crazy to realize is that this seasonal tradition began somewhat by accident. In 1988, the Huitink family had a pumpkin display set up by their garden.

“We had people stopping to ask if those pumpkins were for sale,” Helen Huitink recalls. “Our children came up with the idea that the next year they would grow and sell their own pumpkins, and they sold about 70 pumpkins off our front step.”

Since 1988, the business has had much success and grown in ways the Huitinks could not have envisioned.

This is the 18th year of Pumpkinland’s themed corn maze, which has six hidden posts to find and takes about an hour to complete. There are over 100 varieties of pumpkins, gourds and squash available pre-picked or pick-your-own.

Another big attraction are all of the home-baked goods, brought out fresh daily. Some favorites are pumpkin pies, pumpkin rolls and pumpkin bread. (Can you sense a theme here?)

Some Saturdays include face-painting, and there will be occasional pony rides. Food vendors come and provide fun, fair foods like funnel cakes and slushies.

If you’re looking for something to do with your friends and family this fall, stop by Pumpkinland. They’re open Monday through Saturday, 10 a.m. to dark, and they’d love to see you out there! 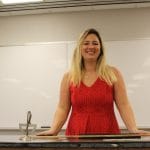