Anna Kiel put up some impressive numbers on the first day of action, posting double-digit kills in both matches (12 & 10). Kiel added 3.5 & 2 blocks respectively to add to her impressive numbers. Alongside Anna, Josie Blankespoor and Lauryn Hilger added nine kills each, and Lacey Wacker served up 35 assists against the Mauraders. In the second game, AJ Horstman (7), Makenzie Fink (5), Hilger (4), and Emily Van Ginkel (4) were the other top hitters. Fink dished out an impressive 6 aces, and Hilger led the Raiders with 12 digs.

Horstman led the Raiders against Chadron State by putting down a match-high of 16 kills. Horstman hit an impressive .625 from the right side (16 kills, 1 error, 24 attempts) to go along with five aces. Kiel proved to be, yet again, a strong option by dropping 12 kills on 22 attempts. Fink provided some firepower, adding 11 kills and 4 digs. Wacker put up 45 assists while guiding the Raiders to a .430 efficiency. Karsyn Winterfeld proved valuable from the service line by adding six aces to go along with eight digs. She was one of three players with eight digs.

In NW dominating performance over York, NW hit .488. The Raiders had 48 kills in 82 attacks against just eight errors. Kiel led a balanced NW attack with 11 kills, her eighth match with double-figure kills this season. Hilger poured in nine kills and eight digs, while Fink and Van Ginkel dropped in five kills apiece. Winterfeld led the back row with nine digs and also added two aces.

The Red Raiders will be playing in the Clarke Invite this coming Friday and Saturday in Dubuque, Iowa. The first match will pit the Raiders against Cardinal Stritch University at 4:00 on Friday, Sept. 8. 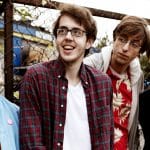 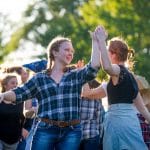 Grab yer boots for the hoedown