The Raiders emerged victorious in a GPAC conference showdown Tuesday night against visiting Mount Marty with an impressive 3-0 shutout.

In a lopsided affair, the Raiders outshot Mount Marty 31-10. They also had 15 shots on goal to the Lancer’s five.

“Harri [Edwards] made a nice pass and it felt really good to score my first goal,” Bogaard said.

Five minutes in the second half, junior midfielder Nick Hengst headed in a free kick by junior left back Justin Lehman, bringing the score to 2-0.

“We started off pretty slow,” Bogaard said, ”but we really started to get things rolling in the second half.”

The Raiders were led in shots by senior forward Jono Taves with eight, five of which were on goal. Lehman and freshman forward Ryan Johnson each had four shots, with one and two on goal, respectively.

NW traveled to Doane, Neb. on Saturday to face the Tigers in a GPAC clash that resulted in a 2-0 Raider shutout.

In a chippy, hard-fought game, the Raiders held their poise and managed to outshoot Doane 15-4, with 4-2 shots on goal.

The first half was highlighted by aggressive play from both teams that resulted in 31 fouls between the two of them.

Following a Tiger foul in the 28th minute, Lehman sent a free kick into the box that was finished by Hengst, which put the Raiders up 1-0 heading into halftime. It was the defensive midfielder’s first goal of the season.

The Raiders entered the second half with confidence, outshooting Doane 10-2.

Doane received a red card that gave NW a one-man advantage. The Raiders capitalized in the 70th minute when Johnson scored a goal assisted by sophomore midfielder Gabriel Goncalves to push the score to 2-0.

The Raiders were led in shots by sophomore midfielder Leo Sanchez with three. A host of other Raiders finished with one shot on goal.

The Raiders return to the field at 3 p.m. on Saturday,  hosting GPAC opponent Hastings and honoring the seniors with the last home match of the season.

“Hastings will be our toughest conference match, so we need to have a great week of practice,” Bogaard said. “We definitely need to work hard.” 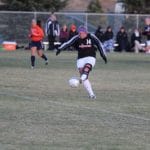 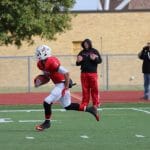