The Northwestern women’s soccer team managed to pick up two GPAC wins in the past week.

They improved their record overall to 7-5-2 after winning 2-1 at Doane on Saturday and against Mount Marty on Tuesday.

Against the Lancers of Mount Marty, the Raiders put consistent pressure on their opposition throughout the night, and were led by junior Missy Yorchak scoring two goals.

They were the first goals for Yorchak this season.

In the 5th minute, Yorchak lofted a shot from 30 yards over the keeper to put NW on the scoreboard.

Mount Marty responded in the 24th minute by turning a corner kick into a goal.

For the entirety of the second half, NW looked to be the stronger team, not allowing a single shot on goal and only two corners.

“We worked hard and made clean passes,” said junior forward Ann Calsbeek.  “We’ve really improved on that from last year.”

Yorchak gave the lead back to the home squad in the 56th minute with her second goal of the contest.

Yorchak was far and above the most dangerous threat for the Raiders all night. All five of her shots were on target.

Juniors Alyssa Duren and Jo Jensen were accurate as well with two shots on target each.

Junior Ariel Watts had a relatively easy night in net, only needing to make two saves.

On Saturday, the Raiders took home a 2-1 overtime win from Doane.

Doane got ahead early with a goal in the 17th minute, and looked content to hold onto their 1-0 lead going into halftime.

NW refused to be shut-out, and Farr broke through in the 76th minute to equalize. Gibson assisted her on the goal.

The score stayed at 1-1 till the end of regulation, and overtime was going to decide the winner.

In the 97th minute, Farr scored the golden goal and propelled the Raiders to the win column.

“Skill-wise, we had a lot of players that could get behind their defense,” Calsbeek said.  “We made a lot of good plays by passing through balls behind the back line.”

Farr had four of her six shots on target, which led the Raiders in both categories. Gibson got off four shots of her own. Calsbeek also provided offensive pressure with four shots.

Watts had an above-average night, collecting 12 saves in the 97 minutes of play.

NW will host GPAC power Hastings at 1 p.m. on Saturday at the soccer complex.

The seniors and parents will be honored before the match, which is also going to be a pink-out for breast cancer awareness. 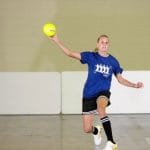 Students are ‘too XC for our shirts’ 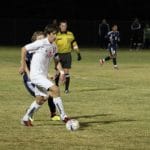