Tyson Kooima led the No. 24 Raiders to their third straight victory to start off the season, netting five total touchdowns. Northwestern defeated Concordia 35-21 in their GPAC opener and improved to 3-0 (1-0) while Concordia dropped to 1-2 (0-1).

Kooima, who tossed four touchdowns last week, helped account for all five Raider scores this past Saturday. The freshman showed off his big-play ability as both a passer and a runner. Both of Kooima’s touchdown passes went for more than 50 yards and added three rushing touchdowns, two of which were over 20 yards. Kooima completed 19 of 32 passes for 316 yards and also led the team in rushing with 15 carries for 69 yards. The Red Raider offense put up over 400 yards of offense for the third straight week.

After Concordia struck first, it was all NW. The Bulldogs scored on its first possession of the game on a 47-yard touchdown. NW came back with a quick drive of 65-yards on 7 plays. The drive was capped by a two-yard touchdown run by Kooima. The drive was made possible when Kooima and Jacob Kalogonis connected on a 35-yard pass and catch to convert a key third down.

NW secured the lead  halfway through the second quarter when Kooima went 24 yards into the endzone on an impressive run. This put the Raiders up 14-7 at the half.

NW’s defense put in another solid week and held Concordia scoreless in their first two possessions of the second half. The Red Raider offense took advantage, using another big play as Kooima and fellow freshman Shane Solberg connected on a 61-yard touchdown. On NW’s second drive of the half, Kooima ran in from 39 yards out to make it 28-7 Raiders.

Near the end of the third quarter, NW defensive back Logan Richard picked off a Bulldog pass in the end zone for a touchback. The Red Raider offense followed with an impressive 80-yard drive that ended with a 56-yard touchdown pass from Kooima to JC Koerselman. This put NW up 35-7 and essentially ended any hope of a Concordia comeback.

The Bulldogs scored a pair of  touchdowns late in the game to make it 35-21, but the Raider victory was never in doubt.

Kalogonis was held in check by Concordia, rushing for 30 yards on 20 carries, but did snag five passes for 56 yards. Solberg had 3 receptions for 85 yards and 1 touchdown. Koerselman nabbed 6 catches for 82 yards and a score. Levi TeBrink had 4 receptions for 81 yards.

Sean Powell led the Raider defense with 7.5 stops, including six solo tackles, and two passes defended. Nate Bennett and Jacob Jenness had 5.5 tackles each, and Cody Bauman added on three tackles and NW’s only sack.

NW will head to Sioux City next weekend to face off against Briar Cliff. Kickoff will be at 1:00 p.m. 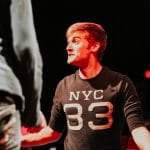