The Red Raiders needed to win their last two games of the regular season to be guaranteed part of the GPAC Regular Season Title. These two wins would have to come against Midland and Dakota Wesleyan, two programs that have been deemed a part of the top 25 teams in the nation.

After defeating Midland last Saturday, all the Raiders needed to do was beat Dakota Wesleyan at the Corn Palace this past Wednesday, a task that is easier said then done.

Northwestern started the first half off with a bang, jumping out to an early lead that kept on growing. With roughly nine minutes left in the first half, the Raiders had an eight-point lead and were looking to further extend it before half.

The lead for the Red Raiders jumped all the way up to 12 points, yet Dakota Wesleyan was able to cut into the lead before halftime, narrowing it to a single point.

Going into halftime, the Raiders were up 36-35 after a late-made free throw by senior Mading Thok. Junior Nathan Wedel led the Raiders in points with 10, and in rebounds with five. Fellow juniors Colton Kooima and Riley Francis finished the half with eight and six points respectively.

For much of the second half, both NW and Dakota Wesleyan exchanged baskets with each other, keeping the game close and the scoring consistent. It wasn’t until the final minute and a half of the game that Dakota Wesleyan began to take a slight lead, edging ahead of the Raiders 75-72. Dakota Wesleyan never looked back, extending their lead to six and beating NW 83-77.

Senior Jordan Baker finished the game with a double-double, snatching 12 rebounds and scoring 14 points. Kooima finished the night with 17 points while Wedel scored a total of 16 points. As a team, the Raiders went 3-22 from beyond the arc, a surprising stat for a team that shoots so well from three-point range.

With the loss to Dakota Wesleyan, the Raiders still have a chance at splitting the GPAC Season Title with up to three other teams, depending on the result of Saturday’s GPAC matchup between Hastings and Briar Cliff.

While the regular season may be over, the Raiders now turn to the GPAC postseason tournament where they look to make a run at the GPAC title and a spot in the NAIA Division II National Tournament. 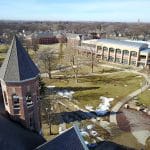