Sophomore Sarah Wittenberg often gets a surprised reaction when she tells people her brother is engaged to her roommate, junior Nicki Bogaard.

The two Fern Smith Hall residents have a connection that dates back to middle school.

Both Pella natives, the pair met on the middle school swim team where they began a friendship that continued through high school. They shared similar interests, both participating in swim team and cross country, and they hung out with the same group of friends.

When Nicki and Sarah decided to attend Northwestern after high school, they considered being roommates.

“We were really good friends, so it just seemed like the right thing to do,” Nicki said.

“I was looking for a roommate who was going to challenge me spiritually and academically,” Sarah said. “I knew it was going to be a big stress learning to live with someone I didn’t know, so we were able to bypass that awkward stage.”

In their second year as roommates, they have learned how to live with each other and embrace one another’s quirks.

“We are both very OCD about things, so we don’t have to worry about being messy,” Sarah said.

However, Sarah and Nicki have also experienced challenges in living together.

“We are comfortable at different temperatures,” Sarah said. “She likes things to be cold, but I like things to be warm and toasty.”

Nicki is bothered by the multiple alarms Sarah sets.

“They wake me up every morning,” she said.
When it comes to roommate bonding, the pair finds it hard to schedule time to spend together.

“We don’t have a lot of spare time so we definitely have to be intentional about it,” Sarah said.
They stay busy with school work and extracurricular activities.

“We occasionally have pillow talk, and when we do, its really good,” Nicki said.

One of their favorite memories is going to Blue Bunny Ice Cream Parlor in Le Mars to take a break from their studies.

“We each got our own ice cream and then shared two additional servings,” Nicki said. “We pigged out and felt really fat afterwards.”

Though some may find the arrangement awkward, Sarah sees it differently.

“I love that Nicki’s with Zach because it means I get to see Zach more,” Sarah said.

“I don’t think it’s as weird as most people think it is,” Zach said. “They work well together and overall they seem to gel really well.”

Both Nicki and Sarah feel blessed to be friends and roommates.

“I can come to Nicki for seasoned wisdom,” Sarah said. “Rooming together is like having a big sister. The big sister I never had.” 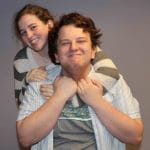 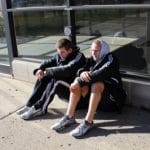