Black Friday has become a major part of the Thanksgiving holiday. For some, shopping for deals at midnight is a beloved tradition; for others, it is a sad picture of American materialism.
Senior Adam “Pots” and freshman Josh “Pans” Potter celebrate Black Friday with a tradition of their own.
These Chicago residents begin waiting in line at Best Buy as early as 3 p.m. on Thanksgiving in hopes of getting the first-come, first-serve deals for their friends and family, who in turn pay them for their time in line.
Last year, with their coupons and earnings, they got a $200 widescreen TV for free. In the midst of the fun, they keep the spirit of Thanksgiving in mind by rotating who gets to go home and eat with their families in the evening.
Black Friday isn’t just about good deals, though. For many, the experience is every bit as important.
“The best part is sitting in line,” said junior Ethan Raysby.
Best Buy puts on a show while their customers wait, complete with a TV truck, a contest and free cheesecake.
“We sit out all night, so you have to make friends with the people around you and entertain each other,” Adam said.
One year, the brothers were interviewed by a reporter and joked that they were there to buy their dad a Shake Weight, an item Best Buy does not actually sell.
However, there are some NW students who do not enjoy the Black Friday madness as much as the brothers.
“I just think it’s a disgusting display of American consumerism,” junior Katie Krebs said. “Americans are really good at turning holidays into something full of greed and possessions. We’re supposed to be thankful for all we have, but people kill themselves to buy a big screen TV.”
The Potter brothers experienced this violence last year while they were standing in line, when a group of people wearing masks ran over their beanbag game with a car while yelling and causing a scene.
The timing of Black Friday bothers some people as well. Raysby expressed frustration over Black Friday sales beginning earlier on Thanksgiving each year.

“It’s ridiculous because it gets pushed up into Thanksgiving Day,” Raysby said. “They should keep it at midnight.”

Even the Potter brothers admit their family’s Thanksgiving celebration may be compromised because of Black Friday.
“It is cutting into the true meaning of Thanksgiving,” Josh said. “My family still celebrates it for the right reason, but my mom doesn’t like that we go to Black Friday so early. She still wants family on Thanksgiving.” 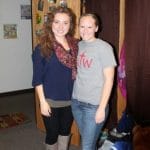 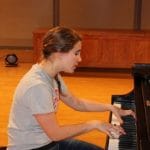