Home News RUSH participation down by over 30 percent
News

Northwestern’s annual student dance performance, RUSH, which has been held in February for the past two years, will take place in September this year.

For many of the sophomores and juniors on campus, RUSH being held during the spring is all that they have ever known.

“The main reason for the switch is that it fits better in the theater schedule,” said RUSH stage manager, junior Amalia Vasquez. “It started in the fall and the past few years, when it was in the spring, were experimental years.”

The change has caused some students to rethink their involvement in the event. Last year 210 students participated in RUSH. This year only 140 students decided to be involved in the event.

“I did not participate in RUSH this year because it was at the beginning of the year, and I did not know how hard my classes would be because they were not in full swing yet,” said junior Becca Rens.

Not only is the general anxiety about new classes and the initial syllabus shock a factor in participation, but the amount of students involved in fall sports also plays a role.

“I do cross country in the fall and I just cannot handle the physical toll of both those activities at one time,” said sophomore Paul McCleary.

Other students cannot get enough of RUSH, and it does not matter what time of year it is, they will stop at nothing to be a part of it.

“I love RUSH, it is one of my favorite things on campus. So I knew I was going to do it anyway,” said junior Alex Mullenberg

“All the upper classmen have been advertising RUSH to me, they told me that I would love it. Plus, I love to dance so I know it will be fun,” said freshman Brianna Darling.

RUSH has always been a popular event on campus, whether students are dancing in it or simply attending the show. Students enjoy the energy and talent of all those involved.

“RUSH unifies people from all different majors and all different areas of campus in one event that they can do together,” said RUSH student producer, junior Jackson Nickolay. 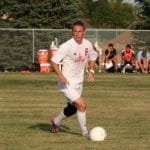