Two years have gone by since the first “Insidious” movie was released, yet as “Insidious Chapter 2” opens, it has been mere days since the Lambert family got their son back from a demonically induced coma.

Unfortunately,the nightmare is not over for this family. When Josh Lambert, played by Patrick Wilson (“The Conjuring,” “The A-Team”), went into The Further, the spiritual realm where these demons reside, he brought something back with him. Something that needs him and his family to die in order to live again.

The highlight of the film is that the ghosts and other special effects, both in The Further and in the real world, were well done and convincing.

The movie as a whole, however, fell short of being scary. There were many times when the movie was building, and viewers were prepared to be spooked but were disappointed.

Everything was too convenient, even for a scary movie. When characters got in trouble, they just happened to know what to do or had met a conveniently helpful person twenty years ago. Predictable scenes such as creepy basements, tooth-pulling sessions and “something” in the closet were too unrealistic to actually be scary.

In the end, “Insidious Chapter 2” is your average scary movie. You’ll jump a few times, probably cover your face for a bit, and constantly ask the characters “Why would you do that!?” 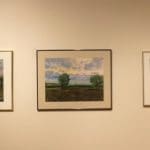