Lowly’s work featured in his current show at Northwestern, titled “Without Moving, Tondos,” are a collection of pieces starring his daughter Temma.

“Temma is profoundly other,” Lowly said. “Our culture calls it ‘profoundly disabled.’ Reflecting on her being has been a frequent subject of my work.”

Lowly was attracted to the images in this collection because they don’t look like the same person. These tondos (circular images) are focused on the value of being someone apart from the capability of doing something.

Temma is not only the subject, but the influence that motivated Lowly’s style in these works.

The collection involves a mixed process that includes photography, textures, drawing and painting. The pieces achieve continuity in shape, medium and scale (all pieces being about one meter in diameter).

Lowly’s work involves a digital processing of photos from the past five to six years, combined with many layers of textures. Lowly prints the images out, adds drawings to them, rescans the images and prints them on large water color paper. He then sands them down, allowing the texture of the paper to come through, making it a part of the foreground. A final layer of acrylic paint that closely matches the color of the ink is then added.The finished look almost resembles that of an old icon, aged and weathered over time.

Lowly stated that these works are not about achieving a pure media, complete objectivity or subjectivity. They are about wanting to capture different moments that are the convention of what people see, and not the categories we often put people in.

Lowly intentionally created these pieces of art so that they cannot specifically illuminate themselves. He remarked that people will often categorize Temma as not experiencing life because it is different than their conventional definition of it, yet he believes that Temma is experiencing life in her own way. By illuminating and capturing these moments of her life, the viewer encounters an experience. Lowly wants to bring to light the questions of acceptance over categorization of humanity through compassion, not pity.

The intimate portraits in this show focus on the face, allowing the viewer to feel very close, as if physically in front of the subject. Lowly remarks they are “a record of a life lived.” They embody the mystery of experiences that connect humanity.

The lack of specific narrative allows viewers to bring their own interpretation to the work. Sometimes it can be a reflection of our own perspective, in which we ask how often we use this to distance ourselves from people who are different from us.

“Everything can be reduced to the one simple element, which is all a person can count upon in his existence: the capacity to love,” Lowly said. “My function is to make whoever sees…aware of his need to love and to give his love, and aware that beauty is summoning him.”

Lowly’s pieces are ultimately enabling and encouraging people to see things in a way they have never before seen them.

His current exhibition, “Without Moving, Tondos,” will be displayed in NW’s Te Paske Gallery from Oct. 20 through Nov. 17. A public reception will be held at 7 p.m. on Thursday, Nov. 17. 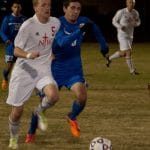