Daniel Craig is back as British super-spy James Bond. “Skyfall,” the 23rd entry into the legendary film franchise, marks the 50th anniversary of 007 on film. “Skyfall” is Craig’s third appearance in the latest sequence of Bond films, that began with 2006’s “Casino Royale” and 2008’s “Quantum of Solace,” which show the beginning of Bond’s career as Agent 007 in the UK’s secret intelligence agency, MI6.

The movie opens with an action-packed chase scene with Bond and another agent, Eve (Naomie Harris), pursuing a stolen hard drive that contains the identities of undercover NATO agents. The director of MI6, M (Judi Dench), makes a decision that results in the supposed death of Bond and the loss of the hard drive. M is asked politely to retire by her political higher-ups, and the MI6 headquarters are attacked. Much of the plot revolves around M’s control over her agents and their unquestioning loyalty to her.

This film explores new territory in the series. Bond’s own past, the dysfunctions of MI6 and the British government play large roles, and character development is more important than spectacle.

But “Skyfall” is much more like the classic James Bond film than “Casino” or “Quantum.” Complete with witty one-liners, banter, charm, seduction, death-defying stunts, close calls, intuitive fixes, gadgets and a slightly disfigured super-villain, this is the time-honored Bond that fans love.

Beyond these similarities, the filmmakers also pay homage to the forerunners. Die-hard fans will recognize quotes, musical cues, gadgets, cars and more favorites.

Under the direction of Oscar-award-winner Sam Mendes, “Skyfall” takes itself seriously but not too seriously. The huge fights and chases are balanced by slow-paced and suspenseful scenes that keep the viewer’s eyes glued to the screen, and the cinematography is impressive without being burdensome.

Each actor performs to his or her full potential, but Dench and Bardem’s performances are easily Oscar-worthy. In the same way, Adele’s huge opening theme song will likely be in the running for Best Original Song.

Modern classics such as the Bourne series and Christopher Nolan’s Batman trilogy have revolutionized the action genre, and movies have been emulating them ever since their debut.

Although “Skyfall” was obviously influenced by this style, it separates itself in a way that is uniquely James Bond. Fans of the series will have no reason to dislike this latest entry. 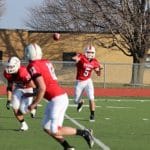