The men of Northwestern’s soccer team came away with a 3-2 win over conference rival Morningside on Tuesday. This is NW’s fifth win in the last six games and second conference win, putting the team’s record at 7-3-1.
Five minutes into the first half, an apparent NW goal was called back by the officials due to a controversial, but later proven correct, offsides call. Throughout the first half, the possession was fairly even and neither team was able to score.
“Despite the officiating and the disallowed goal, we were able to keep our head and focus to come back with a win,” said junior Brandon Hammack. At the beginning of the second half, Morningside scored a goal only to be answered two minutes later by junior Mario Garcia. In the 55th minute, sophomore Harri Edwards netted freshman Gabriel Goncalves’ corner kick to give the Raiders a 2-1 advantage.
Morningside rebounded in the 65th minute with a goal of their own. Six minutes later, NW sophomore Jason Tessman scored the final goal of the match on a penalty kick, which he slotted into the right side of the net.
“We finished out chances when we needed, but we have some things we need to clean up defensively,” said junior Nathan Mastbergen.
NW outshot Morningside 19-11 in the match. Junior Taylor Biggs and Goncalves led the team with four shots. There were five yellow cards and one Morningside red card in the physical match up.
“We know one of the keys to this game was going to be keeping our focus and staying mentally tough,” said sophomore Graham Kinsinger. “There was a lot we could have gotten caught up on, but we kept our composure and came up on top.”
Last Saturday on Homecoming, the Red Raiders shut out Westminster 2-0 in the first game on the newly renovated grass field.
NW’s offense exploded for two goals in the 34th minute. Garcia found freshman Adam Abuhadema for his first goal of the season. Just 31 seconds later Goncalves made a daring run into the defense and chipped home in his second goal of the season.
Garcia led the team with three shots. Hammack and Abuhadema each had two shots and six different Raiders had shots on goal. Garcia’s assist was his fourth of the season, a team high.
“We played well first half,” said junior Bryan Duffey,  “but we slowed down in the second half and allowed Westminster to have too many scoring opportunities.”
Luis Hernandez made seven saves in the shut-out victory, his sixth of the season.
NW travels to Fremont, Neb., this Saturday to play Midland. 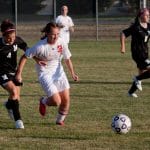 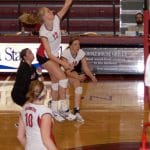 Raiders pull above .500 in GPAC play